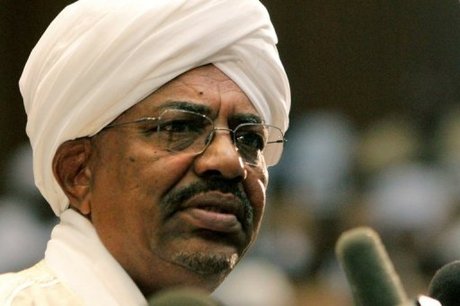 Nigeria's presidency on Monday defended welcoming Sudan President Omar al-Bashir to the country for an African Union health summit despite war crimes charges against him, saying it cannot interfere in AU affairs.

Bashir arrived in the Nigerian capital Abuja on Sunday for the summit on HIV/AIDS, turberculosis and malaria despite being wanted by the International Criminal Court on charges of war crimes, crimes against humanity and genocide.

The summit is due to take place on Monday and Tuesday. Rights activists in Nigeria say they plan to go to court on Monday in an effort to force Bashir's arrest.

"Nigeria is just hosting it. It's not Nigeria that invited him. He's not here on a bilateral visit. He's here to participate in an AU summit, and Nigeria is not in a position to determine who attends an AU event and who does not attend an AU event ... Nigeria is just providing the platform for the meeting."

The Hague-based ICC in 2009 and 2010 issued two warrants against Bashir over the conflict in Sudan's Darfur region, where government forces and local Arab militias have been pitted against rebels drawn mainly from non-Arab populations. In 2008, the United Nations estimated that 300,000 people had died because of the conflict, but Khartoum disputes the figure.

Since Nigeria is a member of the ICC, it technically has a legal obligation to arrest suspects wanted by the court.

Some African Union members and officials have criticized the Bashir indictments, and the body has passed a resolution calling on members not to cooperate with the warrants.

The court has been accused of unfairly targeting Africans and some have argued that the arrest warrants against Bashir complicate peace efforts.

Bashir has previously visited ICC member states, including Chad, Djibouti and Kenya, but countries like South Africa and Botswana have ensured he stay away.

Human Rights Watch has said the AU resolution to ignore the warrants has "no bearing on Nigeria's obligations as an ICC member."

Hosting Bashir is an "affront to victims" of the Darfur conflict, said Elise Keppler of the International Justice Program at Human Rights Watch.