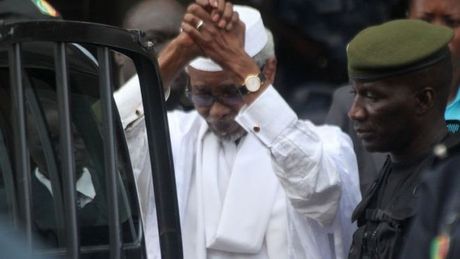 More than 1,000 alleged victims of former dictator Hissene Habre are suing him in Senegal, where he is being tried for genocide during his eight-year rule of Chad, their lawyers said on Wednesday.

Habre, 70, faces accusations of war crimes, crimes against humanity and torture during his brutal rule between 1982 and 1990, when some 40,000 people were killed, according to rights groups.

Arrested in early July after more than two decades in exile in Senegal, the former dictator was placed on remand in Dakar where he is to stand trial after years of delays by the Senegalese government.

"We will represent the 1,015 victims throughout the proceedings, from the investigation to the trial," their lawyer Jacqueline Moudeina, flanked by five of the alleged victims, told a media conference.

"These victims have suffered abuses under the regime of Hissene Habre. They expect justice to be done."

Moudeina said the lawsuit, which will be heard as part of the criminal proceedings, included a request for Habre's assets to be frozen so that her clients -- who are mostly Chadian -- can be compensated.

Five of the alleged victims broke down as they told the tribunal on Wednesday how they had been tortured under the Habre regime.

"Over four years, I saw the worst things," said Clement Abaifouta, president of the Association of Victims of the Crimes of Hissene Habre's Regime, who was arrested in 1985.

"I was forced every day to bury (inmates) who had died as a result of abuse."

Hadjo Amina Moctar said she had suffered a miscarriage after being arrested, without being given a reason, and tortured.

Chad's Commission of Inquiry into Habre's alleged crimes, set up after he fled, estimates that only 4,000 of his victims have ever been identified.