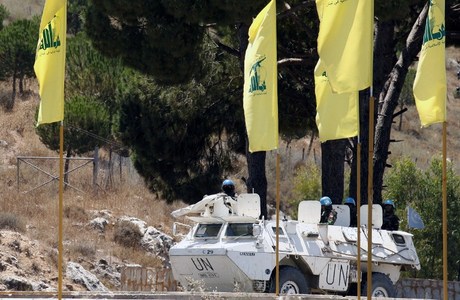 The United Nations Interim Force in Lebanon has taken precautionary measures around its posts in the South, reported the National News Agency on Tuesday.

It said that the measures were taken in light of the European Union's decision to blacklist Hizbullah's military wing as a terrorist organization.

UNIFIL intensified its security measures near its posts and added more cement barriers as a protection around some of them.

It set up barbed wire fences around others and placed surveillance towers to counter any retaliatory attack linked to the EU's measure.

The NNA added that UNIFIL reduced its patrols in the South, except those it carries out with the Lebanese army.

The news agency noted a lack of any UNIFIL patrols in southern border villages, especially Bint Jbeil, Ainata, and al-Tairy.

UNIFIL patrols had been the target of various unclaimed roadside bomb attacks in the past, the last of which took place in 2011.

There have been constant fears that the UNIFIL force stationed in the south of the country would be an easy target should the unrest in Syria reach Lebanon.

On Sunday, Turkey's Anatolia news agency reported that Hizbullah members intercepted a Spanish UNIFIL patrol in the South and accused it of taking pictures of a house belonging to a member of the party who was killed in Syria, before army units intervened and resolved the dispute.

Spain currently commands the 12,100-strong UNIFIL force, which was founded in 1978 and expanded after a 2006 war between Israel and Hizbullah.

France has one of the largest contingents with 1,300 soldiers.

In July 2011, six French UNIFIL troops were wounded, one of them seriously, in the southern coastal town of Sidon, in an attack similar to Friday's. Earlier that year, six Italian peacekeepers were wounded in Sidon, also in a roadside bombing.

Three Spanish and three Colombian peacekeepers were killed in June 2007 when a booby-trapped car exploded as their patrol vehicle drove by.

"UNIFIL patrols had been the target of various unclaimed roadside bomb attacks in the past, the last of which took place in 2011."

Attacks perpetrated by the exact same Al Qaeda Wahabist terrorist faction the EU is currently trying to arm in Syria. You have to admit the EU and the UNIFIL can be sort of funny sometimes lol.

UNIFIL's mission should be re-examined. They should fire at anyone holding weapons except the only legit Lebanese army.

lol. i actually wish they'd do that. they would find out the real definition of "terror" within minutes.

Look at HA territories, Lebanese flags fluttering everywhere ............ it makes me shiver and my heart beat so fast. So much patriotism give me goose bumps.

NostraHelicopter, whatever happened to NostraHarrier? Did he get goose bumps and succumbed from the fast heartbeat like your friends the Israelis in 2006 as they cried like little girls and the left overs among them have been shivering to date with their loud mouth wide open? takbir

Yep. The only reason H.A. has the kind of army it has today is because Iran funded and built it while excluding and ignoring the rest of the Country. Just imagine, I come to your house, and I equip your son with weapons and shower him with money. Next morning you wake up, your son has the money and the power to use you like a kitchen rag. He does not need to declare himself as the head of the house, but it really doesn't matter since he can pick you up and trough in the dumpster anytime he wants. What H.A. did and caused in Lebanon in 2006 alone is still hurting the Lebanese.

My compatriots, has anyone heard of the prominent warrior and Naharnet blogger allouchti bin laden? I wish him a safe return from the front lines of BS.

FT, get it in your tiny little brain that Hezb has NO AUTHORITY OR MANDATE to INTERCEPT anyone. Not Unifil, not Lebanese ...

And why the hell do you bring up Naharnet in every single one of your comments ? If you're not happy here, go away ...