Moussawi Meets Eichhorst: Continuation of Cooperation with Hizbullah up to Party Leadership 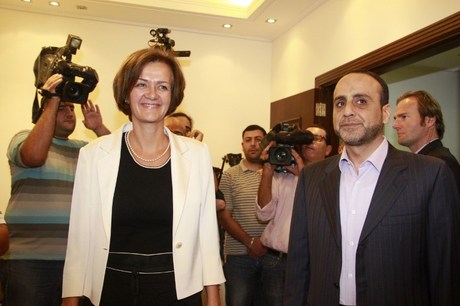 Hizbullah international relations official Ammar Moussawi slammed on Thursday the European Union's decision to blacklist the party, describing it as an insult to Lebanon and its people.

He said after holding talks with EU Ambassador to Lebanon Angelina Eichhorst that the decision to continue cooperation between the union and Hizbullah lies in the hands of the party's leadership.

“Blacklisting the party is an insult to all Lebanese, Arab, and Islamic people who believe in resistance,” he declared.

He informed Eichhorst of Hizbullah's rejection of the EU decision, saying that the union succumbed to American and Israeli orders, as demonstrated by Israeli Premier Benjamin Netanyahu deeming it as a diplomatic victory.

Moussawi responded by saying that Netanyahu should mind his own business when it comes to European-Lebanese ties.

Moreover, he remarked: “Israel may benefit from the blacklisting of Hizbullah, but we know that Israel does not need an excuse to attack Lebanon.”

“Everyone knows that Hizbullah's political and military wings are the same,” he added.

For her part, Eichhorst said that the EU's decision is a political message to Hizbullah's military wing.

She added that blacklisting the party should not justify any retaliation by a foreign country, including Israel, against Lebanon.

She reiterated the EU's assertions on Thursday that the decision will not impact dialogue between the union and Lebanon or aid it provides to the country.

So it is your minuscule terrorist party rat of a leader who will decide if you will keep communication with great European Union or if he does singof singof 3alatoul with the union?

You are beyond pathetic.

Spot on! I can't believe this bastard is given the right to speak of the Lebanese people and the Arab people whom their hands are drenching with their blood.

No, the Lebanese as a population have NO love for you and if you don't believe me fine, run a referendum in Lebanon to see if people are OK with you having weapons and operating above the government and the law.

The Arab population are you kidding me? Look at recent polls there is NO love for Nasrallah and his gang.

Ignorance is looking at wrong straight in he face, and allowing others to justify it for you and you believing it blindly.

inside. Suppose you are right. Suppose HA did not kill anybody.
Tell me. How come a single sect is permitted to carry weapons and not others?
As a christian, can I be elected to HA's leadership? Or I dont have the right to "resist"?
This is your proof that your party is a bully to lebanese.

Really ,why even meet with this woman? If she had met with me under similar circumstances she would not be smiling even if she was Hillary Clinton. If someone insults you to your face and is plotting ways to harm you then sends a woman to make nice and smile at a camera that is compounding insult on insult on insult on insult.I hope Moussawwi took a bath afterwards.

What majority? You must be on pills....

...Blacklisting the party is an insult to all Lebanese, Arab, and Islamic people who believe in resistance,”...

Ammmm Moussawi... A minoraty of Lebanese are insulted ... DON'T YOU DARE SAY ALL!!!
Hizbshitan THUGS...

We need a resistance against Hizbshitan, Isreal and the terrorists(who ever that is).

So, the EU fives a few $million to the Hizballah Political Party.
Once that money reaches a Lebanese Bank, who is to stop them transferring it to their illegal terrorist wing ?
Until that problem is solved, I have a feeling that donations are going to be heavily reduced.