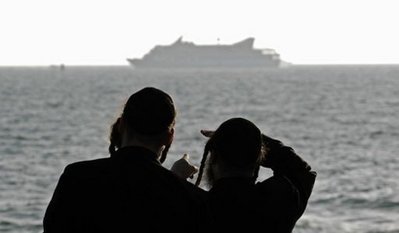 Hundreds of activists are preparing to board aid ships bound for Gaza this week in defiance of an Israeli blockade and U.N. warnings and in spite of the violent end to an operation last year which left nine dead.

About 350 pro-Palestinian supporters hailing from 22 countries are set to join the "Freedom Flotilla" leaving from Greek ports.

Bestselling Swedish crime writer Henning Mankell and many journalists are among those taking part in the action seeking to break a five-year long Israeli naval blockade.

Nine Turks died when Israeli forces seized the Mavi Marmara, a ship taking part in the international aid flotilla in May last year.

The raid sparked worldwide condemnation and soured relations between Ankara and Tel-Aviv.

Israel said on Thursday it was determined to stop the flotilla, calling the protest a "provocation" and saying the country had a right to self defense.

U.N. envoy Ron Prosor said: "The flotilla has nothing constructive -- there is nothing humanitarian or anything that has to do with Palestinian welfare in the organizing of this flotilla."

U.N. Secretary General Ban Ki-moon and a number of governments have warned the flotilla not to start while the U.S. government has urged its nationals against taking part in the protest.

Israel imposed a blockade on Gaza in 2006 after militants snatched Israeli soldier Gilad Shalit. A ban on civilian goods and foodstuffs was eased last year but many restrictions remain in place.

Boats from Greece, France, Italy and Spain are among those taking part in the flotilla. Ankara said the Mavi Marmara had been withdrawn this year and that there would be no Turkish vessels involved in the operation.

The boats will leave from various Greek ports or meet off the coast, said Vaguelis Pissias from the country's "A boat for Gaza" group, without specifying a departure date.

Greece is being used as a departure point due to its geographic position and its "historical, cultural relations with Arab countries," he said.

"What happened last year caused us grave concern ... but we are determined to go to Gaza, our aim is not simply to break the embargo but to show Israelis and people in the region that they have the right to live more harmoniously," said Pissias.

The United States said last week that such flotillas were not needed to funnel humanitarian aid because aid can be delivered to the Israeli port of Ashdod, from where it can be transported to Gaza.

"We do not believe that the flotilla is a necessary or useful effort to try to assist the people of Gaza," said U.S. Secretary of State Hillary Clinton.

"Just this week, the Israeli government approved a significant commitment to housing in Gaza. There will be construction materials entering Gaza.

"And we think that it’s not helpful for there to be flotillas that try to provoke actions by entering into Israeli waters and creating a situation in which the Israelis have the right to defend themselves," Clinton said.