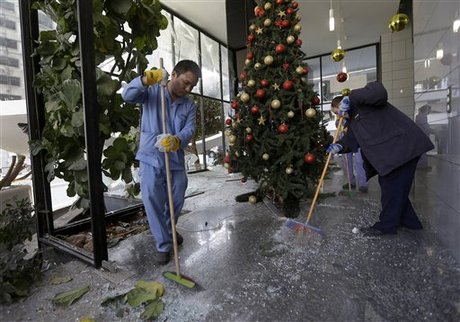 A Beirut car bomb that killed an anti-Syria politician underscores how Lebanon has become a "microcosm of regional conflicts", with violence escalating as Damascus and its ally Tehran become more emboldened, analysts say.

"This latest political assassination reflects much more than a simple spillover of the Syrian war. I think we're past that stage, and we have now entered a full-fledged Saudi-Iranian proxy war," said Paris-based expert Karim Bitar.

"The intense polarization in Lebanon makes it easy for Iran and Saudi Arabia" to settle scores here, "and the country has zero immunity," said Bitar, of the French Institute for International and Strategic Studies (IRIS).

Lebanon is sharply divided over the war in neighboring Syria.

Tehran-backed Hizbullah backs President Bashar Assad's regime, while the March 14 coalition supports the revolt that broke out in 2011.

Damascus ended its 30-year domination of Lebanon in 2005, but continues to exert significant influence over the country through its ally Hizbullah.

Hizbullah has thrown its weight behind Assad's regime in Syria's war, sending political and sectarian tensions in Lebanon soaring.

Lina Khatib, who heads the Carnegie Middle East Center, described Lebanon as "a microcosm of regional conflicts, and it would be fanciful to assume that it would manage to escape the security repercussions of the Syrian conflict."

And with the West all but silent on Syria, Assad and his allies in Iran and Lebanon are feeling "more empowered following the international negotiations about nuclear and chemical weapons," said Khatib.

Shatah's killing comes in the context of "a series of attacks and counter-attacks targeting opposing political camps in the country," she added.

That attack came after two car bombs in south Beirut in summer. One of them, on August 15, killed 27 people.

"The attacks (against both sides of Lebanon's political divide) are aimed at destabilizing Lebanon and pulling it closer to the Syrian conflict," said Khatib.

IRIS' Bitar said attacks against both March 14 and Hizbullah targets are both "pure, unadulterated terrorism," but emphasized that "the modus operandi and rationale are very different."

Starting in 2005, nine anti-Assad politicians and intellectuals have been assassinated in attacks widely blamed on Syria. Two other security officials and a general were also killed.

This string of killings started years before the Syrian revolt, and with the latest assassination, "Syria might be sending the message that it is still able to destabilize Lebanon if its influence and interests are not preserved," said Bitar.

As for the attacks against Hizbullah targets, "they are part of a wider regional power struggle between rival intelligence services (and) the consequence of rising Sunni-Shiite animosity."

Regional powerhouse Saudi Arabia backs Hariri's camp in Lebanon and has supported, along with Qatar, Syrian rebels against Assad's regime.

With Saudi-Iranian rivalry at an all-time high, it is likely the attacks Lebanon is suffering will only escalate.

"Only an Iranian-Saudi rapprochement can put an end to such crimes, and it seems far off," said Bitar.

Meanwhile, the elimination of moderates like Shatah benefits extremists on both sides of the Shiite-Sunni divide.

"Lebanese moderates no longer have a word to say and two mutually reinforcing Sunni and Shiite extremism are now left alone," said Bitar.

Imad Salamey, who teaches politics at the Lebanese American University, agreed, warning that Iran will be the main beneficiary of heightened Sunni extremism.

"If this continues, what we will be left with is... Sunni extremists leading the Sunni communities," Salamey warned.

"These extremists are presented as hostile to the West, as hostile to moderate solutions... and therefore this will give the upper hand to... the Iranian proxy groups... and will make them look like the moderates."

The attack comes in the midst of a Lebanese domestic political crisis. For eight months, Lebanon has had no government, and March 14 and Hizbullah appear further than ever from reaching a deal.

Salamey said: "I think it is very possible that a new series of assassinations and car bombs will begin taking place... as both parties... are stuck, and are unable to come up with an acceptable solution to either side."

Friday's bombing is also seen in some quarters as a warning shot ahead of the start on January 16 of the U.N.-backed Special Tribunal for Lebanon, tasked with investigating the 2005 assassination of Lebanese former prime minister Rafik Hariri.

Five Hizbullah members have been accused of involvement in Hariri's killing and are due to be tried in absentia by the court.

"Microcosm" is too kind! It's a dumpster!

This picture on its own is difficult to comprehend, a Christmas tree with shattered glass around it. Your microcosm ladies and gentlemen.

Sagh, u deserve a hard earned chupachup after writing that essay :)

@Sagh : why do you skip Syria's dominance of Lebanon ?

Murder, Physical Abuse, Rape and Discrimination ? This is what Syria did until we kicked them out.

Show me how M14 have done any of the above. You're stupid !

Sagh
If you were a christian or a Alwaite, so why is your F... Ruler in Damascus is still holding 1500 Lebanese which mostly from the Christian side. So in short you are as Barbaric as them and you have been doing it for over 30 years. so if someone says to me "someone just dropped a nuclear bomb or bombs on Lebanon I will say Hellouyah, only for one reason perhaps the killing will stop for around 500years and the place will turn into a park at least.

"and the country has zero immunity,"
"Lebanese moderates no longer have a word to say and two mutually reinforcing Sunni and Shiite extremism are now left alone," said Bitar.

Neither France (IRIS/AFP), the US (Carnegie), nor Lebanon's formal state (Lebanese American University) have a word to say about democracy in Lebanon, where the 30% who are Christians (by law) get 50% of the seats in Parliament. March 14 got 45% of the votes and 55% of the seats in Parliament in the last election.
Anybody who stands up for one-person/one-vote in Lebanon is both the most moderate and the most radical of political voices. Reality is like that.