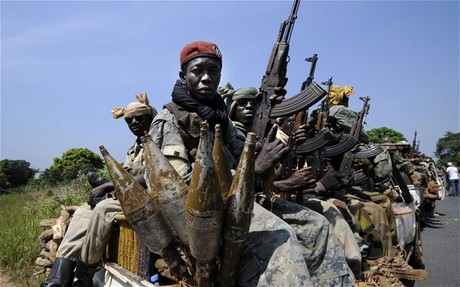 Chad announced Thursday it was withdrawing from the African peacekeeping force in Central African Republic after being accused of siding with a mainly Muslim movement that seized power last year.

Chad came under the spotlight at the weekend when at least 24 people were killed and another 100 seriously wounded by Chadian soldiers sent to repatriate their compatriots from the CAR, according to officials there.

The government in N'Djamena said it was withdrawing from the MISCA force as it denounced "a wanton and malicious campaign" against its troops, one that it said made them "bear the responsibility" for all the country's troubles.

"Face with these repeated accusations, Chad... is deciding to withdraw the Chadian contingent from the MISCA (African force)," the government statement said.

It said the practical steps of the withdrawal will be tackled in "common agreement" between Chad and the African Union.

"In the meantime Chad will assume without fail its peace mission in the zones it is responsible for in the CAR," according to the statement that did not give details about the areas.

The government said it has informed the president of the Central African Republic, the African Union and the UN Secretary General of its decision.

Chadian soldiers have been accused of siding with the mainly Muslim Seleka movement -- which held power from March 2013 until January this year -- and of showing passivity toward abuses some of them carried out against the population.

Chad has always denied the charges.

CAR's interim president Catherine Samba Panza announced Tuesday the opening of an investigation into the killing of the 24 people by Chadian soldiers.

It was the worst-known incident involving foreign troops since French and African peacekeepers deployed in CAR late last year.

A MISCA officer said on Sunday that the soldiers had fired after they were attacked, but locals and members of the local "anti-balaka" militia said the soldiers had deliberately fired on the crowd.

In the past year, the country -- one of the poorest in the world -- has been racked by Muslim-Christian fighting that has claimed thousands of lives and left hundreds of thousands of people displaced.

In the last few weeks, the mainly Christian anti-balaka militias have been accused of spearheading violence against Muslim communities.

The militias were formed last year in response to a coup in March 2013 by the Seleka rebel group.