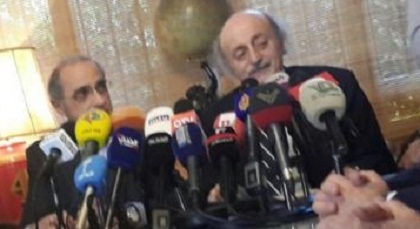 Progressive Socialist Party leader MP Walid Jumblat on Tuesday announced the revival of the Democratic Gathering parliamentary bloc and the nomination of its member MP Henri Helou for the presidency, one day before a parliamentary session aimed at voting for a new president.

“The Democratic Gathering has been revived with all its members and we're one family again,” Jumblat said after a meeting in Clemenceau.

“The Democratic Gathering nominates Mr. Henri Helou for the presidency,” he added.

“We are proud to announce this nomination and we will never cast a blank vote. We pride ourselves with this unifying candidate whose openness and moderation are well-known,” said Jumblat.

He pointed out that “Helou has his Christian representation," stressing that "this nomination is not aimed at maneuvering."

Reminiscing the period that witnessed Suleiman's election as president, Jumblat said: “Arab and international circumstances had helped us in 2008 to make a settlement and we had the best political and personal ties with President Suleiman and we cannot but salute him.”

“We all took part in dialogue and laid out the groundwork on which we can build a strong and capable state, in which the decision of war and peace is in the hand of the state, and I mean the Baabda Declaration which was approved by everyone,” Jumblat added.

“I salute ex-PM Najib Miqati, with whom we took part in a cabinet that was described as Hizbullah's government, but we managed to impose a certain centrist policy, which has produced Suleiman and Miqati,” he went on to say.

Hitting out at Hizbullah, Jumblat said: “I wish they had implemented the self-dissociation policy as we would've spared the country the booby-trapped cars.”

In January 2011, Jumblat had announced the split of the Democratic Gathering bloc after four MPs broke away from it in protest at his decision to nominate Miqati for the premiership. He announced back then the formation of the seven-member National Struggle Front.

The four MPs who withdrew after they nominated ex-PM Saad Hariri were Marwan Hamadeh, Antoine Saad and Fouad al-Saad, in addition to Helou.

But Helou later decided to join the National Struggle Front and was among the ranks of the Jumblat bloc that supported the nomination of Tammam Salam for the premiership.

“We are seeking openness towards everyone and I have an ambition to restore dialogue and partnership among everyone,” said Helou during Tuesday's press conference.

“A strong president is one who can gather all Lebanese around the dialogue table and this is the approach adopted by Walid Beik's and the starting point for the coming period,” he added.

“My nomination is not a maneuver and we have no solution other than openness. We call on everyone to take part in tomorrow's electoral session so that we can return to the approach of dialogue,” the presidential candidate went on to say.

He noted that candidates are not important, “but rather the rescuing of the country.”

“I'm not interested in the post but rather in rescuing the country and the approach of openness and moderation,” Helou underlined.

President Suleiman's tenure ends on May 25, but the constitutional period to elect a new head of state began on March 25.

Helou and Lebanese Forces leader Samir Geagea are so far the only two candidates who have announced official nominations.

The parliament is scheduled to convene Wednesday for the first round of voting amid concerns that the needed quorum will not be met.

“We all took part in dialogue and laid out the groundwork on which we can build a strong and capable state, in which the decision of war and peace is in the hand of the state, and I mean the Baabda Declaration which was approved by everyone,”

See, Walid, HA is allergic to this kind of talk. Thus, Henri's nomination will be dead on arrival.

and I would take FT over Aoun

so junblatt gets to pick who the christian and the lebanese president will be.

Seriously this country is a joke and its sad state of affairs is regrettable. On the eve of the Presidential elections, Jumblatt miraculously unifies his old block and announces a Christian Presidential candidate. just to sabotage Geagea's nomination. Who do these people think they are fooling?! Did he get a big lump sum from Iran to go ahead and come up with this move... beyond me.

not sure about kattar, baroud or kawaji, but for the rest, u're probably right...

Texas, west gave legitimacy to bashar since beginning by calling him a defender of minorities and women rights while depicting all rebels as islamists... The day US will stop rebels embargo, Bashar will leave alone knowing he wont resist despite his khomenist mercenaries...

I hope so. But the history of Lebanon suggests that at anytime, there is at least a portion of lebanese implementing foreign agendas.

M11er
I soooo agree with you I hope one of these 2 will be elected. Time for a change for a better change I might add

texas, dont be fooled by few TOWs and diplomatic maneuvers, US have been backing Assads for 40 years...

texas, lets say u're fighting with a guy that has a sword. And I give u a stick, did I help u really or just in appearence ?
US will not let rebels win by the embargo, but will not let them lose... US are extending the war, ie Syria's destruction.
It's called bait and bleed strategy, they did the same with Iraq-Iran