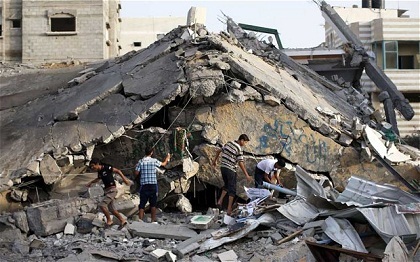 The U.N. aid agency for Palestinians on Tuesday described the damage wrought by Israel's air offensive on Gaza as "immense", with more than 500 homes razed.

"According to our latest figure, we are talking about 174 killed and well over 1,100 injured. This number will increase. The numbers are increasing by hours," he told reporters.

"A good number of those killed and injured are women and children. That is a cause of concern for UNRWA," he added.

The death toll on Tuesday had risen to 192, according to local officials in Gaza.

Mshasha said that 560 homes had been totally destroyed, while thousands of buildings had suffered damage.

Mshasha said that 47 UNRWA facilities had also been damaged by bombing.

A total of 17,000 people had found refuge in 20 schools run by the U.N. agency, which has sent their GPS coordinates to Israeli authorities.

He called on the warring sides to respect U.N. buildings.

Israel on Tuesday announced it had accepted an Egyptian ceasefire plan after a week of bombing, but the move was rejected by the Palestinian Islamist movement Hamas which controls the territory and has fired a hail of rockets at Israel.

Without a halt to the fighting, Mshasha said, the risk of an Israeli ground assault on the enclave remains, raising the specter of even greater death and destruction.

In a separate statement, the International Committee of the Red Cross (ICRC) said the bombing had devastated Gaza's water supply.

"Hundreds of thousands of people in Gaza are now without water. Within days, the entire population of the Strip may be desperately short of water," said Jacques de Maio, who heads ICRC operations in Israel and the Palestinian territories.

"Water and electrical services are also affected as a result of the current hostilities. If they do not stop, the question is not if but when an already beleaguered population will face an acute water crisis," he said in a statement.

Fighting is also preventing technicians from carrying out essential repairs.

Following the deaths of several municipal water technicians, Gaza's water service provider has suspended all field operations until the safety of its staff can be guaranteed, the ICRC said.

"Gaza's water system has been deteriorating for years. The latest attacks are the last straw. Safe drinking water is becoming increasingly scarce in the Strip, just as temperatures are soaring," said ICRC water and sanitation expert Guillaume Pierrehumbert.

"Water is becoming contaminated and sewage is overflowing, bringing a serious risk of disease,"

Of course Asaf and company will now tell us about the humanitarian work of the state of Israel.

If someone is killed in the USA or 10 houses are flooded in Europe or 500 people displaced in Asia; the world will be roaring in frustration for the human suffering and they will declare disaster areas and start meetings to help the injured. Here we have 170 dead; 1000 injured; 500 homes totally destroyed; 2000 housed damaged; 50000 people homeless and cannot be displaced as there is no where to go. Yet the world is sleeping and no one cares.Israel did not yet confirm the identity of the killers of its 3 youth and its evident that Hamas has no interest in doing this act; yet Israel found an excuse to devastate Gaza in order to satisfy its people. What if radical jews or palastenian traitors killed the 3 youth in order to instigate this reaction? It will be toooo late then to appologize..

Why doesn't that same UN Agency give details of even whilst the firing is going on, how many trucks go into Gaza from Israel every day carrying food, medical supplies, fuel, gas (over 200) and how many enter from Egypt (none).
Where has UNWRA been for the last 66 years with their millions upon millions of dollars. Instead of investing it in the infrastructure of the Gaza Strip, into building houses, schools, etc, it has been handing the money to the ruling class there, keeping the so-called refugees in abject poverty.