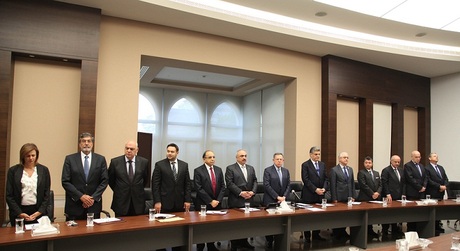 The Mustaqbal parliamentary bloc condemned on Tuesday the clashes between the army and gunmen from the al-Nusra Front in the northeastern town of Arsal, saying that the attack against the army is tantamount to an assault against the whole of Lebanon.

It said in a statement after its weekly meeting: “We hold Hizbullah and those allied to it largely responsible for the developments in Arsal and what Lebanon and its army have to endure.”

It explained that Hizbullah's involvement in the ongoing fighting in Syria alongside the Syrian regime forces “obstructed the decision-making power of past Lebanese governments.”

“It thwarted the governments from taking any decision aimed at protecting Lebanon or disassociating it from the conflict in Syria,” added the bloc.

“Hizbullah took part in the fighting in Syria without the consent of the Lebanese state and people. It violated the border with Syria through the transfer of weapons and gunmen, which led Syrian gunmen to Lebanon,” it continued.

“Hizbullah had involved Lebanon in the Syrian crisis and created spite between the people of the two countries,” it stated.

Moreover, the party obstructed “the national Lebanese decision that call for the deployment of the army along the border with Syria.”

“It did not allow the government to seriously deal with the case of Syrian refugees after it prevented it from setting up organized refugee centers near the border with Lebanon,” said the Mustaqbal bloc.

Hizbullah should therefore withdraw from Syria “in order to halt the spread of catastrophes, extremism and terrorism to Lebanon,” demanded the bloc.

“Lebanon was better off adopting a national, political, and security policy at the beginning of the Syrian crisis to protect its border in a manner that would prevent the current dangers,” it continued.

“Lebanon was better off seriously adhering to the policy of disassociation and the articles of the Baabda Declaration, but Hizbullah prevented such ambitions and sought instead to spread the authority of its illegitimate arms outside of Lebanese borders,” it remarked.

“The Lebanese army must restore its complete control over Arsal and the surrounding areas,” it demanded, while voicing its complete backing for the army and lauding the cabinet's decision to provide the military with total support on all levels.

The bloc also demanded that immediate aid be sent to the residents of Arsal, cautioning Hizbullah against meddling in the fighting in the town.

Hizbullah had issued a statement earlier on Tuesday denying that it was involved in the unrest in Arsal.

Furthermore, the Mustaqbal bloc demanded that the government take “the decisive order to protect national sovereignty and work seriously to reach a ceasefire in Arsal, release security forces held captive in the town, and aid its residents.”

The government must also take the decision to deploy the army along Lebanon's eastern and northern borders, said the bloc, while demanding that the United Nations Interim Force in Lebanon be deployed there as well.

It defended such a demand, saying that it was “reasonable” given the dangers facing Lebanon and the unrest in Syria and the region.

The March 14 alliance had repeatedly made such a demand, but it was rejected by March 8 camp officials, some of whom deemed it as “illusory”, while others said more pressing issues were at hand.

At least 16 soldiers were killed and 22 others missing in clashes between the army and al-Nusra Front gunmen in Arsal.

The unrest broke out over the weekend after the arrest of a Syrian man accused of belonging to al-Qaida's Syrian branch al-Nusra Front.

Arsal is majority Sunni Muslim and broadly sympathetic to the Sunni-dominated uprising next door against Syria's Bashar Assad.

“We hold Hizbullah and those allied to it largely responsible for the developments in Arsal and what Lebanon and its army have to endure.”

Patriotic lebanese u mean; shiite sectarian millitia engaging in regional jihad (wejeb jihadi) to help democratic assad, patriotic maliki, and very secular and progressist khomaiini?...
U re no better than da3ech, only shiite style... (There is also da3ech christian style in central affrica, maybe hezbos will go there share knowledge...)
Relax and have a yellow chuoachups my very secular southern friend...

Before there was a crisis in Arsal and Tripoli, HA prevented the rise of the strong State, the Demarcation of the borders and hijacked the foreign Policy in favor of its Iranian and Syrian masters, enough hypocrisy Southerner.

Lebanon's Minister of Justice, the Hezbullah deputy chairman, has promised that the Mustaqbal terrorist organization will be banned under legislation to be introduced in the new term of the Lebanese Parliament, in which Hezbullah has a clear majority, due to the preponderance of Shiites in Lebanon and Hezbullah's success in administration while bearing the additional burden of opposition from the Israeli-led bloc of racist states.

What a bunch of kids...
When 8th was saying that terrorists were infiltrating Arsal and that the army should be deployed, 14th didn't stop crying like litttle babies saying that this was an insult to Arsal, that "Arsal sharifeh" and that there were no terrorists there and that this was an attack on sunna and blablbla, the usual song. Mustaqbal are the ones who protected these terrorists and they are the ones who stopped the army from dealing with the problem sooner. They did the same with the AL Asir clown, they protect these terrorists and once they attack the army, they blame it on hezballah. Very lame, zhe2na from the same song, get a bit more creative.

We can play this game:
Yes it was HA who was respossable for fighting that caused more than 3000 deads in the mid 80s with amal and other faction in the south aka aklim el toufah but southern might hv forgotten that
Yes it was hezballah who assassinated communists, leftists, seculare shiites figures to gain control over the south, southern aldo forgot that
Hezbollah was responssible of all the south thx to a syrian american sponcered taef accord at a point at the lieration he refused army to be sent south and everyone asking the army to deploy south was concidered a traitor, southern forgot that...

bigjohn,
When Mustaqbal became such a large party you credited KSA $$ for that and not their ideology. Yet when HA became so large you credited its moderate ideology and not Iranian $$ (100s of Millions each year).
Objectivity is so scarce on this forum.

Hey, it's not easy being a warlord in this day and age. Little kids tend to laugh at you in the street. It ain't easy.

Hezbos are accused of the assassination of hariri, kassir, hawi....
Hezbos are accused behind assassination attempt of el murr, hmadeh, harb...
Hezbos entering beirut and mont lebanon armed killing and taking control of moustakbal/psp center for purifying them...
The killing if officer samer hana while on an army hellicopter in south lebanon (the guy got 6months!!!!6monthes for willingly shootting a lebanese army officer on duty...
Hezbos killing hachem salman in daylight..
Hezbos covering eid familly knowing they r wanted for the bombing of tripolis mosks..

Mustardonall should do something about it besides arming terrorists, they should take up arms themselves and attack Hezbollah. They would last about 55 minutes and it would all be over.

HA did not create Takfiris, he only kicked them out of Syria and did not stop them from entering Lebanon.
I personally think it was intentional on HA part to force the population to choose between bad (HA) or worse (Takfiris). Moreover, he implicated the LAF are causing them to seem on the same side as HA. HA strategists are very astute.

You guys will never cease to amaze me. I mean even in these difficult times you manage to pursue your stupid mutual blame M6 or M14. what would it take for you guys to finally realize the country is facing the most difficult time ever and it is great time that all Lebanese show unity to salvage the country
you guys are lame

Well said sab3a-ayar. Mustaqbal has financed the islamists in Tripoli and the Bekaa and now they throw all the blame on HA. The 14 March can't do 25% of what HA has done, especially facing Israel, that's why they blame HA with everything, because they are jealous.
I concur with your analysis.