Geagea: Presidential Elections Will Be Staged as Soon as Aoun Changes his Stance 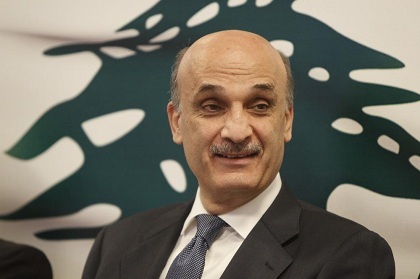 Lebanese Forces leader Samir Geagea condemned on Tuesday the failure to elect a president for the tenth time after the lack of quorum at parliament, holding the March 8 camp responsible for it.

He said during a press conference: “The elections will be held as soon as MP Michel Aoun alters his position on the polls.”

He accused the March 8 alliance of seeking to “impose Aoun's election as president.”

“The other camp is not allowing us any other option to end the deadlock,” lamented Geagea, who is a presidential candidate.

“The postponement of the polls is a major crime against Lebanon and the highest Christian post in the country, especially given the regional developments,” he added.

Speaker Nabih Berri postponed for the tenth time the election of a president following a lack of quorum caused by a boycott of the March 8 camp's Loyalty to the Resistance and Change and Reform blocs.

The dispute stems from the political blocs' failure to agree on a consensual candidate.

Aoun has yet to announce his candidacy, saying he will once there is consensus over him.

The eleventh presidential elections session has been scheduled for September 2.

Well as they have done for the governent formation, they will block ll alternative untill getting what they want...
I only hope no assissantion till then...
U know in case israel wants to assassinate any lebanese political figures like it did since 2005....

Aoun will go down in history as the biggest Christian traitor Lebanon has ever seen....

Dear kris, allow me to re-formulate. Thank you. 'you - kris - will go down in history as the most **** Lebanon has ever seen....' of course after your undisputed master - who really deserves the first rank and phil...and i can assure you without any doubt !!!

Long live the General, the worst nightmare of Lebanon's thugs and thieves.

Really? Geagea was the one who offered to withdraw his candidacy in favour of other candidates to resolve the deadlock. If he made this about himself he'd be the one boycotting Parliament. Geagea never went on television and said he could make Hariri PM. Michel Naim Aoun has made this all about himself and his nephews and sons-in-law to take over the army.

That was to Flamethrower, who said Geagea made this about himself. But his stupid comment got deleted.

Sophia
He already did that to Lebanese and to Lebanon. We are in the abyss thanks to his lunatic and erratic behavior

Neither Geagea or Aoun is worthy of becoming president. But in your eyes Aoun the army defector and supporter of the butcher mass murdering civilians in Syria is an absolute saint. Please create a statue of him and start worshiping him at will but don't forget to pray to him to bring back our prisoners from the Syrian jails. You people have no shame, no morals and no dignity.

A word of advice*
What you don't get is no one is allowed to speak on behalf or Christians. Not Geagea, not Aoun, nor any of their supporters. These two guys are the reason Christians are divided. And stop with the convicted murder cliche. The man served 11 years in a windowless cell 24 hours a day while your glorious Général sat on a sofa in Paris drinking Evian. If your boy Michel was the one sitting in jail you'd be saying how admirable he was for not fleeing. Spare me the bias.

Wrong. Geagea offered to withdraw his candidacy in favour of consensual candidates. It's because of Aoun's stubbornness that Jumblatt is holding on to Helou and M14 is holding on to Geagea.

This is very relevant. Every single word Aoun says is selfishness and hypocrisy. It's because of his dementia (he thinks he's the leader of Christians) that we don't have a president. I'm a Christian, and he isn't my leader. Neither of Geagea. They should both be in exile. I just bash Aoun because he says stupid things. Geagea hasn't said anything to make me wanna punch him yet.

Convicted in a court controlled by Syria. He was acquitted for the church bombing but convicted for murder. And that doesn't even matter. Because I don't support Geagea. Plus you didn't deny that if Aoun stayed he would have been imprisoned as well.

The sole purpose of charging him for the church bombing was to revoke his amnesty for the crimes he did in the civil war. Had Aoun stayed Syria would have done the same with him. Only difference between these two men is Geagea was a gangster who had balls and went to jail while Aoun was trying to stand up for his country but fled like a pansy.

He was acquitted for the church bombing because the only point was to revoke his amnesty. He murdered people during the civil war, that's all they needed.

"Yes the General was in Paris as was Tueni or anyone else who opposed the Syrians in Lebanon at the time..." Geagea was opposed to Syria but stayed. Facts, Roar. Facts.

Is attacking Geagea your only way to argue? What Geagea did does not take away what Aoun did. You're just trying to justify Aoun's actions by comparing him to Geagea. Both of these men ruined Christianity in Lebanon. Geagea put it in a coma at AUB hospital. Aoun fled, came back 15 years later to see Christianity still in a coma then he unplugged the cord, put it in a coffin and spit on its grave. That's what these two men did to Lebanon.

What you need to learn in arguing is that two wrongs don't make a right.

Buddy I never had a problem with Aoun fighting Syria. It was Geagea who left Aoun alone. Stop trying to paint me as a Geagea supporter. I am with myself only and I have my own version of a perfect Lebanon. All I do is criticise people because I like it. It's only because Aoun is acting stupid that makes you think I like Geagea.

Binary, what Aoun did 25 years ago has nothing to do with what he did since he came back. Like you said he resisted Syria. When he came back he allied with them. Then you say "well the Syrian occupation was over." Wrong answer. Their influence in this country continues through Hezbollah. Aoun should have held on to his anti-Syria stance. What he's doing today is a disgrace

Bigjohn, Aoun is the one who is refusing to officially nominate himself. How could M8 remove a candidacy that was never announced.

When was the last time Aoun (or anyone else) gave weight to what Dr. Arreet 7akeh says? Not even the loser who is stuck with him in a matrimonial contract takes him seriously.