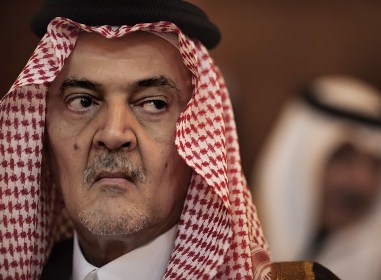 Saudi Foreign Minister Prince Saud al-Faisal, whose country has joined the U.S.-led air strikes against Islamic State group militants in Syria, said Riyadh was ready to help Lebanon if it asked for assistance in its battle against jihadists.

In remarks carried by An Nahar newspaper on Thursday, al-Faisal said: “We have helped Lebanon to buy weapons through a $1 billion donation.”

Asked if Saudi Arabia would help Lebanon confront the wave of terrorism that it is facing, he said: “We would do so if it asks for assistance.”

He stated the Lebanese officials have appreciated the Saudi $1 billion grant.

“We hope it would have a bigger impact in protecting Lebanon's security,” he added.

The Lebanese army engaged last month in bloody gunbattles with jihadists from the al-Qaida-linked al-Nusra Front and the IS, which took with them hostages from the military and police.

The fighters executed three of the captives and warned they would kill more hostages if the Lebanese authorities failed to meet their demands.

Al-Faisal said Wednesday that the U.S.-led campaign against the extremists "should start by putting an end to the causes of this terrorism."

"The regime in Syria is the cause of the appearance of ISIL," he said, adding it had created a security vacuum which had led to the group's rise.

"Our support for the moderate opposition should not be limited to the military sphere... but should also include practical steps to weaken the Syrian regime by an economic blockade," the prince said.

He also called on those responsible for crimes to be brought before international courts.

"The only thing that we expect is for this regime to go," al-Faisal added.

yes it did to the sectarian militia

as well as to the lebanese army, but saudi elements in the government refused to accept it.

"saudi elements in the government refused to accept it.". You mean the HA-Aoun one sided government that governed for 2 years without M14 and without 'Saudi" elements in it. You were once good at propaganda, but not anymore.

you guys quit praising the KSA! they are no friends of Lebanon. They are the source of our problems and the so called military assistance to Lebanon has yet to materialize. They are bound by their fanatical view of Islam. Their day of reckoning is fast approaching

They are the source of our problems, says who?

Coolmec. The way the kingdom is run internally is certainly fanatical. I agree.

However their attitude and goodwill towards Lebanon keeps on surprising me. Why give 1billion to the central bank in 2006 to prop the lebanese pound? Why give 1B now? why all the infrastructure projects financed here? Minnon majboureen. Yet they do help.

Lebanon first
May I remind you that money given to Lebanon serves only to promote their self interests. It is a corrupt regime bent on fanatical wahabism aimed to propagate such ideology. they are known to always give money bribe friends and opponents alike with the hope that trouble stays away from their border.
Guess what that train of thought worked for a while as their fanaticism is reaching their border finally and soon they will feel the pain of war that they have so generously financed outside the KSA it is coming back to bite them
I shall have no regrets if such fanatical and backwards regime is overthrown

@coolmec
First off, hope you are having a good time.
Second, agreed, Saudi Arabia is not exactly a model for democracy but to be fair, they did put their money where their mouth is to the tune of $4 Billion to our LAF. How bad is that.
Third, hope you tried Bousali's ma3moul, let me know if you liked it as much as I do.

lebnanfirst
show me the money. it has yet to materialize. I only hope the US will step in and if I were a Lebanese politician I shall provide the US bases in Lebanon.

lebanonfirst
I have not done anything yet resting and friends are visiting me. I still want to go to Bohsali you told me about to have some jnaffeh

lebnanfirst
I remember you told me its location. Riad solh square, where is this bohsali exactly?

@coolmec
Just yesterday An-Nahar reported the US will be providing the LAF with 18 UH-2 helicopters worth $180 million paid for by the Saudi $1 billion grant and other armaments worth half a billion also from that same Saudi $1 billion grant.
Don't get me wrong, the Saudi system isn't an example to be emulated, but the Saudi ruling family has always been good to Lebanon and that's all I care about as long as they don't attempt to force their religious beliefs on us Lebanese Iranian style.
The remaining $3 billion are being delayed pending the presidential election outcome. One might disagree with that move as I do but look, it's their money after all. They pledged it to President Suleiman and do not want it to become a gift to Aoun and HA in the unlikely event he succeeds in becoming president.
Latest reports indicate that in the event all out hostility breaks out France and Saudi agreed that an Ariel bridge will be established To drop those armaments directly to the LAF.

@coolmec
On another note, Bouhsali ma3moul location is at the top of Riad Solh square across from a building project. I forget where exactly Amal Bouhsali's location is but just ask any Beiruty and they can guide to to its location for the best knafeh.

Yesterday Egypt was offering help, today Saudi Arabia, where were they in summer of 06, or why werent they offering help to the gazans not so long ago. Do they love us lebanese or the freedom we enjoy that much that they really want to offer us help.

I was thinking exactly the same thing @cityboy! We always think the same. We both are shia extremists and I hope other posters don't think we are the same person.

Cityboy in Lebanon there are people who do not want to follow neither Iran nor Syria. The government and it's institutions have been weakened and cannibalized by Hizbollah, Syria and Iran. Maybe Saudi are willing to help to avoid that Lebanon is completely sucked up by those terrorist countries and militia.

another day another dollar as flamethrower embarks on yet another day of non stop posting his paid propaganda.

You seem to reward Saudi Arabia for the freedom and relative sense of stability you enjoy in Lebanon. Sorry to say, but if that was your intention, then what a disgrace to the sacrifices made by the true patriots of this country, be they in the Army or resistance. It is because of Lebanese blood that Lebanon maintains its sovereignty, not because of Saudi Arabia. If it were up to Saudi Arabia, we would have had a sheik leading us long ago. By the way got to love how Saudi Arabia promotes stability in Bahrain.

same exactly the same my thoughts are. We both are shia extremists and I just hope people don't think we are the same poster.

As for Saudi wanting a sheikh here. where the hell did u get this idea?

As for Bahrain, it does not concern me. I dont care about what Saudi does there.

@cityboy
But you do have a sheikh leading you NOW! How is that any better? No need to answer a rhetorical question.

No LF2, I dont have a sheik leading me now. That is an insult. HA is not run by one person, it is an organization that is the backbone of Lebanon. It is what helps to maintain a plural and free government despite what many on here like to think.

LF1, how has HA dragged Lebanon into every conflict. That is a blanket statement which is simply not true. If you are also referring to Syria, thank goodness they did enter Syria. I salute them to this day, how many christians or other minorities have been forced out of their homes in Lebanon, compare that to Sryia or Iraq. You can deny it, but lebanon was part of the Isis program.

@cityboy
Sorry you felt insulted though the facts are the facts. Here is a rundown of some of the top HA leaders:
1- Sayyed Hassan Masrallah - top Sheikh
2- Sheikh Na'eem Qassem
3- Sheikh Nabil Qaouk

I call them as I see them. And, of course, we disagree about HA being the backbone of Lebanon, of Iran, maybe yes, but not Lebanon.

My comment might sound bit controversial in this site, but we all know that Saudi Arabia has a long history in supporting Salafi Jihadist groups starting from the war in Afghanistan in the 1980s against Soviet Union that produced the renowned terrorist group Al Qaeda. Moreover, the same pattern was later on repeated in the Syrian war which Saudi Arabia, Qatar and many other countries in the region financed and armed all forms of radical Islamic groups that eventually ended up into ISIS and Al Nusra.

i'm repeating myself: this guy has no human value...and like what ABBA says:
Money, money, money
Must be funny
In the rich man's world
Money, money, money
Always sunny
...please go and have some chupachups and leave Lebanon alone...in another words don't touch it with your durty fingers (-:

wolf
I fully agree you. I am looking forward for the day where the troubles they financed in our area will befall on them. Soon I hope they will feel the pain and misery they cause to their arab brothers namely Lebanon etc...

Lebanon should welcome any country that would help in fighting terrorism and terrorists on its ground..myb they can start by wiping out arsal/ hujeiri/ qualamoun...ect

But this is what they are doing. USA and Ksa are funding and giving weapons to the army exactly to fight terrorism in arsal. Remember the aerial bridge organized in 2007 by the USA when the laf was fighting Nahr el bared.

We've heard this before, did it ever happen?

Flamethrower; You keep exposing them with an incredible wicked sense of humor:)))!! My boss and I wants you to be a guest at our Christmas party

the only way to help Lebanon is to close all refugee camps (Syrian, Palestinian) and take them to ksa where there is none (not 1 refugee camp)

where did you hear it?

Please slash...and seriously: what do we have in common with saudis ?
don't forget, seriously. thank you

you know what slash...? i knew you wouldn't appreciate my question because you don't want to think that far...money, money, money must be funny in the rich man's world...

am i the only one to notice the princes faced looks squished?

Yet the sanctions on Iran never stopped it from supporting HA with Millions of Dollars in cash and military gear.