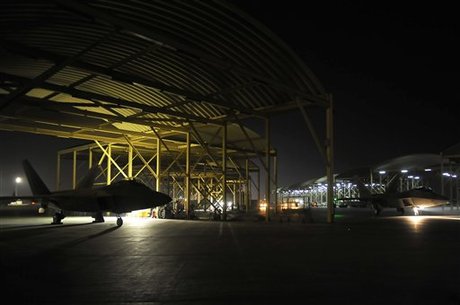 U.S. aircraft have flown roughly 4,100 sorties in the air war against Islamic State militants in Iraq and Syria since August, including surveillance flights, refueling runs and bombing raids, a military officer said Monday.

The number of flights reflects the widening U.S.-led air campaign that began with a more narrowly-defined objective when it was launched by Washington on August 8.

In addition to the more than 4,000 U.S. military flights in less than two months, Arab coalition partners have undertaken roughly 40 flights in the operation in Syria since it began on September 23, the U.S. military officer, who spoke on condition of anonymity, told Agence France Presse.

Of the approximately 4,100 flights by U.S. aircraft, nearly 1,400 have been carried out by aerial refueling tanker planes, the officer said. "Those numbers are as of September 27," the officer said.

There have been hundreds of surveillance flights as well, but the military has not issued a total number for those.

If the operation continues at the present pace, the number of U.S. flights in Iraq and Syria could soon surpass the American role in a NATO-led air campaign in Libya in 2011.

From April to late August in 2011, the United States flew about 5,300 sorties in the air war in Libya, providing much of the aerial refueling and surveillance flights.

President Barack Obama initially ordered air strikes in Iraq in early August to protect U.S. diplomats in Baghdad, to address humanitarian crises and assist Iraqi security forces against the IS extremists, who seized large areas of Iraq and Syria.

But a month later, Obama declared the United States would pursue a "relentless" campaign to damage and destroy the IS group, extending air raids into Syria.

According to the Pentagon, there have been 224 air strikes so far in Iraq, predominantly carried out by American aircraft. French jets are also taking part.

In Syria, where air attacks began on September 23, there have been 66 bombing raids, with 43 by U.S. warplanes and 23 by Arab allies.

Aircraft from Bahrain, Jordan, Saudi Arabia, the United Arab Emirates and Qatar have taken part in the campaign, according to Pentagon officials.

Despite fresh reports from Syria that civilians were killed in air strikes, the Pentagon reiterated Monday it has no evidence the raids have claimed civilian lives.

"So far after all the air strikes, we have nothing to confirm that there were civilian casualties," spokesman Colonel Steven Warren told reporters.

The U.S. air war, which includes about 1,600 U.S. troops in Iraq, likely has cost $780 million to $930 million though September 24,  according to the Center for Strategic and Budgetary Assessments, a Washington think tank.

WOW, they are making ISIS look like a superpower indeed. I thought they were only between 15,000-30,000 fighters! I agree with the need to eliminate ISIS but not the approach. You need to take out Assad, HA, and the shia militias at the same time. Otherwise, more dangerous groups than ISIS will emerge sooner than later. Look at what led to the creation of ISIS: injustice, discrimination, killings, torture, marginalization, etc.

I wonder who is paying for all this.