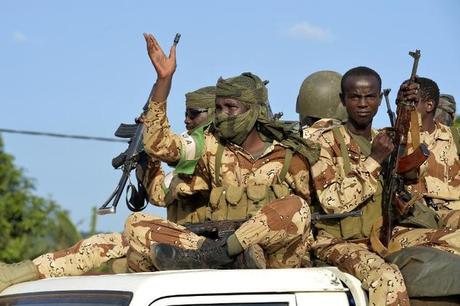 An initial raid was carried out around midday by two fighter jets on the town in Nigeria's far northeast along the Cameroon border, sources from Chad and Cameroon said on condition of anonymity.

It was followed by further bombings of areas around the town, Chadian sources said. The raids were aimed at "allowing Chadian soldiers to enter Gamboru," a Cameroon security source told Agence France-Presse.

Details on damage or casualties were not immediately clear.

Boko Haram overran the town several months ago as part of its campaign to seize territory in the region and create an Islamic state.

The Cameroon town of Fotokol and its surroundings, just across the border from Gamboru, saw fighting between Chadian soldiers and Boko Haram extremists on Thursday and Friday.

Chad's military said three of its soldiers and 123 militants were killed in the two days of fighting in the area.

Chad has deployed soldiers to Cameroon to help in the fight against the Islamists.

The Boko Haram uprising has become a regional crisis, with the four directly affected countries -- Cameroon, Chad, Niger and Nigeria -- agreeing to boost cooperation to contain the threat.

Nigeria's military said on Thursday that its fighter jets had bombed the northeast town of Malam Fatori, also controlled by Boko Haram.

Witnesses and some media reports said troops and airforce planes from Chad were also involved in that operation on Nigerian soil but Abuja neither confirmed nor denied the claim.

U.N. Secretary-General Ban Ki-moon on Saturday gave his backing to an African Union proposal to set up a regional five-nation force of 7,500 troops to fight Boko Haram.

Boko Haram now controls large swathes of territory across northeastern Nigeria, with the country's military having failed to stop the worsening six-year insurgency.

Nigeria heads to the polls in two weeks and the brutal conflict has played a central role in the campaigns between President Goodluck Jonathan and his challenger, former military dictator Muhammadu Buhari.

The conflict has killed more than 13,000 people since 2009, with Nigeria's military also accused of major abuses in the fight against the group. More than a million people have been forced from their homes.

Much of the world became aware of the group after it carried out the mass abduction of 276 girls from the town of Chibok in April last year.

Nigeria is Africa's most populous nation and largest economy, but most of its 170 million people live on less than $1 per day.

U.N. chief Ban, while backing the proposed multi-national force, said that "military means may not be the only solution."

"There should be very careful analysis of the root causes why this kind of terrorism, and extremism, violent extremism, are spreading," he told reporters.