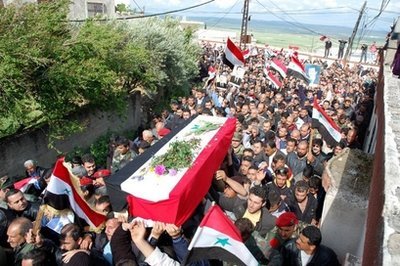 At least four people were killed in a blast in the Syrian government stronghold of Latakia on Monday, but there were conflicting reports about what caused the explosion.

It comes amid heightened fears of attacks in the coastal region after a rebel alliance that includes the al-Qaida-affiliated Al-Nusra Front last month seized Jisr al-Shughur in neighboring Idlib province.

The Syrian Observatory for Human Rights and sources on the ground both reported the blast in the city of Latakia in the coastal province of the same name.

An AFP correspondent in the city saw flames and a column of smoke rising after hearing what appeared to be an explosion in the Mar Taqla neighborhood.

At the scene of the blast, residents said those killed were a father and his son and daughter, along with their female neighbor.

The explosion set fire to the family's apartment and partially collapsed the building's roof.

The Britain-based Observatory also reported that the blast had killed four people, among them two children.

But there were differing accounts of what caused with the blast, with officials in the city refusing to comment and residents saying the cause was unclear.

The Observatory said the blast was the result of a drone that crashed into the city after being hit by a rocket fired from a ship offshore in the Mediterranean.

But the group said it was unclear whose drone it was.

Sources on the ground meanwhile said the blast appeared to be caused by rocket fire, though rebel forces are not known to be close enough to the city to fire rockets into it.

On social media, photos and video purporting to be from the incident showed a column of orange smoke rising into the air.

Latakia province is a bastion of President Bashar Assad's regime and home to his ancestral village Qardaha.

It is home to many members of the country's Alawite minority, the offshoot of Shiite Islam to which Assad adheres.

The western seaboard region of Syria has largely been spared the worst of the violence that has wracked the country since an uprising that began in March 2011.

Many Syrians displaced by violence in neighboring regions have taken refuge in Latakia province, and entrepreneurs have also moved business to the relative safety of the area.