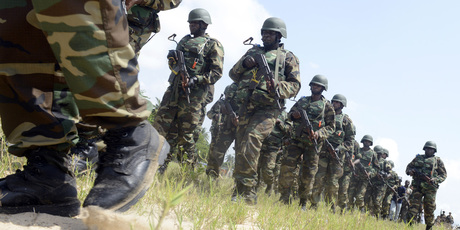 Five Chadian police officers and six Islamists were killed Monday when suspected Boko Haram militants blew themselves up during a police raid on a safe house in the capital N'Djamena, the interior minister said.

The latest bloodshed follows a June 15 double suicide bombing blamed on the Nigerian militants, which killed at least 33 people in N'Djamena in the deadliest attack of its kind in the city.

Chad is one of the countries leading a regional military offensive against the extremists.

"Last night after an exchange of fire we succeeded in arresting the 'brain' of Boko Haram in Chad and northern Cameroon with his accomplices," said Bireme Hamid, without identifying the alleged militant leader.

He said police found "a lot of documents" and during questioning one of those held revealed where the group made homemade bombs.

The minister said as soon as the door of the house was opened "and they saw one of their arrested members, the five Boko Haram blew themselves up... We regret to say that five officers died. And after a search we found the body of another Boko Haram member."

Three more police officers were hurt in the blast, but their lives are not in danger, Bireme Hamid said.

In a follow-up search, three suicide vests were also found.

Before Monday's raid in the capital, Chad's chief prosecutor announced "the dismantling (of a Boko Haram cell) and the arrest of 60 people" as part of an inquiry into the suicide bombings.

"A terrorist cell was identified and taken down. Sixty people were detained," including Nigerians, Chadians, Cameroonians and Malians, prosecutor Alghassim Kassim stated.

Kassim said that one of three people behind the June 15 attacks -- all killed by security forces -- had been positively identified, while the identity of the two others was being checked.

"The debris left by the suicide bombers enabled us to determine that the terrorists were wearing specially-made explosive vests in black fabric," Kassim said.

"Fragments (of the bombs) collected at the scenes of the attacks are identical," he added.

The suicide bombings by three people targeted the police headquarters and the police training school in N'Djamena and also wounded 101 people, according to the latest toll from the prosecutor's office.

Many of those injured in the blasts are still in hospital, one of them in serious condition.

While nobody has taken responsibility for the bombings, N'Djamena has blamed them on Boko Haram, a radical force that launched a bloody uprising in northeast Nigeria in 2009, killing thousands of civilians and putting more than a million to flight.

Boko Haram has several times threatened Chad, whose troops entered Nigeria at the beginning of February this year as part of regional military intervention to battle the Islamic sect.

Jihadist fighters are also active across the borders of Cameroon and Niger, whose frontiers converge in the arid Lake Chad region with those of Chad and Nigeria.

Chadian soldiers based at the border town of Fotokol in the far north of Cameroon on Sunday intercepted Boko Haram fighters seeking supplies in the Nigerian frontier town of Gamboru, an army source said.

"During this operation, the Chadian army killed eight Boko Haram elements and recovered a vehicle stocked with food, six motorbikes and hand grenades," the source said.

"There was violent combat and we could hear sustained gunfire from here. Three hours later, the troops returned to Fotokol and applause from the population," he said, adding that 10 captured Islamists were brought back.

The Chadian air force on Sunday bombed Boko Haram positions on islands in Lake Chad and the raids resumed on Monday morning, the military source said.