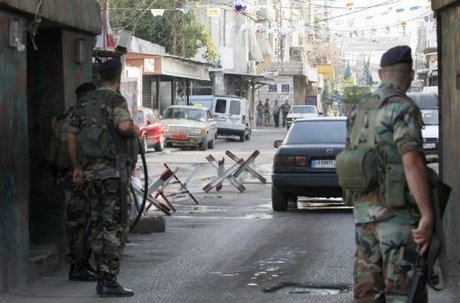 Tension was high in the Palestinian refugee camp of Ain el-Hilweh on Saturday following news of the assassination of Fatah official Col. Talal al-Ordoni, a security official said.

"Al-Ordouni was shot dead by two unidentified men while he was walking in the southern part of Ain el-Hilweh," the Palestinian official told Agence France Presse.

"He was accompanied by two bodyguards, one of whom was also killed and the other was wounded."

Voice of Lebanon radio (93.3) said that al-Ordoni was killed by the Jund al-Sham group.

Supporters of Fatah soon opened fire in the air upon hearing the news of his death.

Jund al-Sham has yet to claim responsibility for the assassination, but VDL identified al-Ordoni's shooter as Bilal Badr, a member of the group.

Badr was wounded in the assassination and he is in critical condition, added the radio station.

Meanwhile, Fatah commander Munir al-Maqdah condemned the assassination, saying: “Some sides do not want security and stability in Ain el-Hilweh.”

“We will strike down with an iron fist those who tamper with our security,” he declared according to VDL (100.5).

In May 2014, Ordoni survived an attempt on his life in Ain el-Hilweh in southern Lebanon.

Ain el-Hilweh, the largest Palestinian camp in the country, is home to about 50,000 refugees.

Assassinations are common in the camp which is a haven for militants and fugitives.

This long standing convention must end sooon! They either submit to Lebanese law or they should leave.

@concerned
and who would give the green light? our corrupt politicians who do not want the army to be displayed in force? yea right

(2). Then these housing estates can be self catering in the sense they'll have their own amenities and other facilities that could generate income for the respective estates. Right now our youths have little hope of marrying and bringing up families for shortage of affordable apartments. For God's sake, get these Palestinians out of Lebanon, they are loss/loss for us all.

(1). These camps caused our wars, caused the excuses for the wars and after almost 70 years, they're still at it. In any case, Lebanon despite all its problems sits at the top of a mountain of real estate boom that already started, and yes, we are to rebuild all those countries that are right now destroying themselves, so by the same token, we need the lands on which all these vermin camps have been set up. They must be destroyed and let those who love them Palestinians take them whoever it may be. Then let's clean those places, and rebuild on them Estate Housing for our youths, and give them housing opportunities which they can pay over a period of 30 years at very low interests.