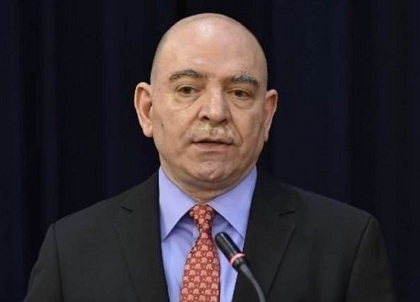 The funeral of activist and intellectual Lokman Slim was held on Thursday in the area of Ghobeiry, in the presence of ambassadors and political, media and religious figures from various sects, and family and friends.

Mother of the deceased, Salma Mershak, delivered the family’s speech, in which she invited Lebanese for “dialogue” instead of bearing weapons.

“If you want a homeland, you must cling to the principles for which Lokman was martyred. The burden will weigh heavy on you. Accept the idea of dialogue and the logic of reason to create a country worthy of Lokman. Stay away from weapons; those have taken away my son,” the grieving mother said.

The ambassadors of the United States, Germany and Switzerland attended the funeral, in addition to several political figures.

The family of Lokman chose to have religious figures from different sects pray for their slain son.

Slim, a prominent Lebanese activist and intellectual known for his opposition to Hizbullah was found shot dead in his car in the country's south last Thursday.

It drew immediate condemnation from abroad and tributes from his many friends.

The US ambassador to Lebanon Dorothy Shea described his killing in her farewell speech at the funeral as a “barbaric act.”

"He who does not know the history of Lokman Slim will not understand the present and will not know how to plan for the future," Swiss Ambassador Monica Kirgoz said. "Switzerland has lost a friend and we will make sure that the task he was undertaking will be pursued."

She indicated that "Lokman and his wife began writing the history of Lebanon 5 years ago, and that Switzerland was a partner to them by providing support."

Slim, 58, had long been a leading secular voice in the Shiite community and was routinely criticised, and often threatened, over his anti-Hizbullah stance.

Lebanese social media erupted over the murder, as people commented on the latest in a long line of Lebanon's political killings.

Slim, long a hate figure for Hizbullah loyalists who accused him of being a Western puppet, lived without personal protection.

We are all Lokman Slim and Gebran tueni sons. Both knew the dangers from a terrorist organization working as a front to Iranian Basij and Syrian criminal regime. Both chose to stand up courageously for sovereignty and freedom, both saw Lebanon's plurality as a strength. Both will live forever in Lebanon's history of heroes and martyrs, whereas Hizb, FPM and this rotten political class will live in infamy. They risked their lives every day for us, for a free and democratic Lebanon. How can we who live abroad in security and freedom not carry the torch of Liberty they handed to us? No one has the right to remain silent! Every day counts to gather thousands from the diaspora to demand what the Batrak is asking for from political neutrality to arms only with army. Nothing else will save Lebanon. Only thousands of us supporting the right candidates can create a counterbalance for Hizb and political corruption.

To succeed and restore Lebanon to its unique role in the region, the next parliamentary elections must be about a program not about people. Not a day should be wasted not working on developing an economic, social, political, reformist plan for restoring sovereignty and independence; restructuring democracy and justice on solid foundation; setting merits, honesty, accountability and transparency as the basis of public service; making all government processes and permitting uniform and on-line reducing corruption and traffic; creating mini Silicon Valleys throughout Lebanon; restoring education, freedom of expression, intellectual vibrancy to its previous glory, insuring basic rights and dignity for all... so we can transform Lebanon into the Resala and Switzerland of the region.

Nothing positive to be expected from this entire corrupt political class, including m14 leaders who misappropriated Cedar Revolution slogans, and made Faustian deal with Iran's occupation force. However, at no time has M8 & M14 political class been weaker and despised by all. Even criminal Hizb militia support is a mile wide but an inch deep, similar to Saddam and Kadafi 99% support before their fall. Once Shia wake up to the poison Hizb has brought to their community, the systematic destruction of their freedom, democracy, openness and prosperity; how they indoctrinated and transformed the most educated Shia community in the world… they will be the first to hang Hizb leaders. What is critical now is for Lebanese living outside to unite under sovereignty and independence. Develop comprehensive reform and reconstruction plan of all sectors, and present credible honest candidates to next election to replace entire political class. There is still time, but not a moment to waste

The Lebanese politicians and most people will kill someone and walk in his funeral march...