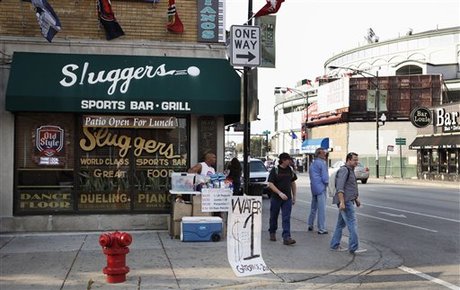 A U.S.-Lebanese man accused of placing a backpack he thought held a bomb near a major Chicago sports field pleaded guilty to weapons charges Monday and could face up to 30 years in federal prison.

Lebanese immigrant Sami Samir Hassoun, 24, admitted he took what he thought was a bomb and dropped it into a trash bin near Wrigley Field with the intent to harm many people.

The fake device was given to him by undercover FBI agents who had been tipped off by an informant.

Hassoun believed an attack would have the ability to "paralyze" Chicago commerce, according to the plea deal, which also requires him to cooperate with the government.

When the hearing ended, Hassoun turned and blew a kiss to relatives in the courtroom.

Defense attorneys declined to talk to reporters after the hearing. They have described Hassoun, a one-time bakery worker, as gullible and prone to boasting but without links to extremists.

Hassoun pleaded guilty to one count each of attempted use of a weapon of mass destruction and attempted use of an explosive device. The U.S. Attorney's office said it would recommend a prison sentence of 30 years.

Hassoun has been in federal custody since his 2010 arrest and faces at least 20 years in prison when he is sentenced Aug. 15. He had previously pleaded not guilty and, if convicted at trial, would have faced life in prison.

I believe the definition of "entrapment" is that the crime would not have happened without the police involvement. Where would this guy have gotten a bomb?
When the rottenness of US national policy (like assassinating Osama bin Laden instead of arresting him) spreads down to the state government level, the US will be ended. The federal attorneys are a warning to us. Lawyers as a group don't care any more about facts, leave alone justice. If states' attorneys start going after people in this fashion, it won't just be another civil war, it will be another revolutionary war: we'll have to start from scratch.

slash and FlameThrower are worried about Arabs getting a bad rap in the US? What do you think "Hajji" means to a US vet of Iraq or Afghanistan? You think being the most Zionistic Arab on earth will get you some relief? You know what an "Uncle Tom" is? It's just like Lebanese who accuse Hezbullah of bringing down Israel's wrath on Lebanon. There is no security in sucking up to an abusive authority figure. "Oh, Dad, I love you, please don't hit me again!"
Hezbullah has enough people--there are enough Shiites in Lebanon--to make it the legitimate government. It defends the turf, it gets the blame, but it doesn't get much help from those Lebanese who cooperate with Lebanon's enemies. So not only do these people betray Lebanon, they fear the return of legitimacy and their own comeuppance. Treachery and guilty fear: that would make a good party slogan.

Maybe we do not agree on who the enemy of Lebanon is. To you Israel is the only enemy. To me the enemy is Israel, Syria, Iran and all those who possess weapons inside Lebanon (too many to count but the big names are Hezb and Palestinians) outside of the army and ISF.