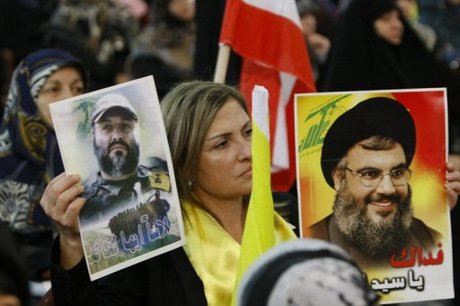 Hizbullah on Tuesday condemned the two bombings that rocked the northwestern Syrian city of Idlib on Monday, saying they were “part of a destructive, subversive plot aimed at eradicating any chance to reach a solution that would rescue Syria from the current crisis.”

“These bombings that sowed death and destruction in a peaceful Syrian city seeking security and stability cannot be the work of a political opposition that wants the welfare of the country and its citizens, but rather criminal bombings aimed at undermining stability and raising tensions in the framework of implementing the conspiracy that is targeting Syria and the region,” the party said in a statement.

On Monday bombings rocked Idlib city and the Damascus suburbs, with the deadliest hitting security buildings in Idlib.

Hizbullah said “these persistent criminal practices are a new evidence of the involvement of international and regional forces – unfortunately Arab – in a scheme to combat Syria and its resistance policy, through targeting civilians across Syria.”

The party urged the Syrian people “to close ranks and show solidarity in the face of this conspiracy, and to throw support behind the Syrian leadership, in order to restore security in the country, achieve reconciliation and reach a new Syria.”

More than 10,000 people slaughtered, including children and women, yet HizbIran decides to condemn bombings against the security HQ. Their public relations department must have graduated from SaaSaa University.

lol! i thought lebanon had to stay outside the syrian crisis! oh! yes hezbollah is not part of lebanon, they do what they want without any problems as they feel above all the lebanese laws...

good for you if you support the killings of people from their own gvt... it only shows the kind of character you have: supporting a terrorist regime: no wonder you defend so ardently hezbollah which is not part of lebanon otherwise they would respect the laws and the constitution of its country and NOT pledge allegiance to a foreign country instead of their own!

but your support to this regime only shows how extremist you are...

Hizb is getting lower and lower by the minute...shame on the Cleric that lies and sides with death.

People who live in glass houses shouldn't throw stones....The audacity of these barbarians to make such comments "bombing part of a destructive, subversive plot aimed at eradicating any chance to reach a solution that would rescue Syria from the current crisis". What did they do to Hariri & Fouad Sinora government not to mention pointing their arms on Lebanese. We also can't forget what they stated in March "Hezbollah planning coup if charged in Hariri murder. Hezbollah chief last week urged Lebanon to halt its cooperation with the inquiry into the 2005 assassination and accused investigators of sending information to Israel." Blah...blah...blah!

Wake up and smell the coffee.....It was your beloved emperor Hassan Nasrallah. I would think you have the capability of web searching to find this very stated fact....that is if your supreme leader Khomeini allows you that freedom to do so. Talking about conditioned sheep....my God!

“At the moment in which Hezbollah feels that the Assad regime is about to fall as a result of social disturbances or foreign military intervention, armed groups under Hezbollah’s command will swiftly deploy and gain control over West and East Beirut with the complete coordination of the Free Patriotic Movement under Michel Aoun. They will claim that these actions were taken in the cause of guarding the resistance and its arms from Lebanese factions. Hezbollah will say that these actions came as a result of confronting these Lebanese factions that were preparing to restrain the Resistance, acting under the coordination of foreign entities with the Israel at their head, who will exploit the fall of the Syrian regime by attacking Hezbollah from the southern front.”

Who says these "terrorist acts" weren't done by ASSad or even the Hezz to aid ASSad? Oh by the way who raped Beirut in 2008 and started the war in 2006?

But I guess destroying Hums neighborhoods and expelling half its people is 7alal and business as usual Mr. Nasralah? You sound just like israel when it accuses the palestenians of being terrorists. The broken record of 'resistance' has become the equivalent of evil, inhumanity and total hypocrisy. How can you call a regime that spreads all its tanks across all of Syria a resistance?? the safest place in Syria is the GOLAN, sti7u 3ala damkun.

The Syrian people have 'closed ranks' and decided to make you an official enemy hizbustan lol.

Interesting how when hizbocrap and their allies are implicated in a crime in Lebanon they say "let's wait for the investigation!!!" but not when they want to blame their opposition of course. Also, since when was Idlib a "peaceful" city it's been under ASSad bombardment for months now!!!