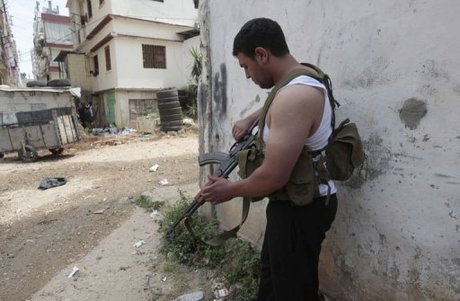 Clashes with light and medium caliber weapons erupted in Tripoli on Friday after two young men were beaten and stabbed while on their way to their place of residence in the mainly Alawite Jabal Mohsen district, a security source told Agence France Presse.

In the wake of the incident, armed clashes erupted between gunmen stationed in al-Qobbeh and Jabal Mohsen and soon spread to the Bab al-Tabbaneh area.

The army intervened and fired back heavily at the sources of gunfire, which led to a decrease in the intensity of the clashes. However, intermittent machinegun fire could still be heard in the area.

Later on Friday, al-Jadeed television reported that two people were wounded in the clashes.

khallas ya 3ami KHALLAS
enough of this violence and the guns, and who's with who and who's against who.

Why doesn't the army shoot back on the Syrian border?

weapons hould be in the hands of the state armed forces only.

Go say that to the people of the USA and see how they will laugh at you.

Ra2ye eno IN Lebanon " ma fi hada ahmar men el tene" as every religious group, every political group if not even every individual carried weapons at least twice through out the last 40 years.

Filth in north, south and dahyie. And they wonder why no tourists.