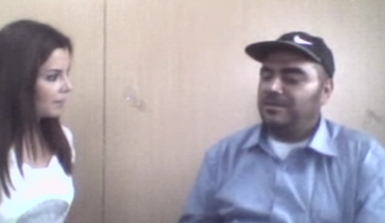 Kidnapper of the 11 Lebanese pilgrims, Abou Ibrahim, stated on Thursday that the captives would be “released very soon, God willing,” reported LBCI television.

He told the television station: “We want Lebanese politicians to officially recognize the Syrian revolution in order to release the pilgrims.”

He suggested that they make the acknowledgement through the media, adding that Hizbullah chief Sayyed Hassan Nasrallah did not offer the apology that was demanded of him.

Nasrallah was demanded to apologize for a May 25 speech addressed to the kidnappers in which he said that his party would not change its position concerning the conflict in Syria, declaring: "If this kidnapping is aimed at putting pressure on our political position, it's a waste of time."

Abou Ibrahim stressed that the captives had been his “guests since day one of their abduction.”

“We wanted to send a message to the Lebanese people on Syrian President Bashar Assad’s actions against us,” he continued to LBCI.

On claims that the captives may be handed over to MP Oqab Saqr, he said: “I have not held negotiations with Saqr, but it is possible to hand over the pilgrims to him.”

“A decision in this matter will be taken later,” he revealed.

On Wednesday, the pilgrims were allowed to contact their loved ones by telephone.

Al-Jadeed television also managed to get a film crew to the pilgrims’ location in Aazaz in Aleppo where they were allowed to telephone their families.

The captives reassured their families that they are doing well and that they were being well taken care of.

One of them asked the Lebanese people to demonstrate outside the Syrian embassy in Beirut and block the airport road to protest the failure to ensure their release.

this is ridiculous this oppostion is a joke . so this is the future of syria where they kidnapp people in order to get what they want. i love how he says that they are his guests this oppostion is no better than bashar al asad they are worse than he is. your just upset that your scare tactics did not work on sayyed hassan. you will release them and you will never get that apology.

just a reminder to hizbushaitan followers:
in its early days what did hizbushaitan do? hijack planes, kidnap people,.... why is it different now?

This abou brahim type did not get enough love as a child. He wants attention. Give it to him khalli ykhallesna and let him release these poor "pilgrims"

i totally agree with you he is despreatly looking for attention

Damn man!!! How can you be glad that a war lasts? the more war lasts the more death, misery and extremism. you like that?