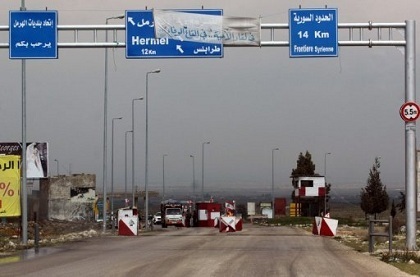 Seventeen Lebanese people were killed on Friday in an ambush by the Syrian army at the Lebanese-Syrian border, reported Voice of Lebanon radio (93.3).

It said that the Lebanese were killed when Syrian troops ambushed their bus as it was heading from Lebanon's al-Qaa region to Syria al-Jousseh.

One of the casualties has been identified as Hamza Amer.

His body has been retrieved and returned to Lebanon, said VDL.

The fate of the remaining passengers is unknown.

The border between Lebanon and Syria has witnessed tensions since the eruption of anti-regime protests in Syria in March 2011.

Syrian troops have repeatedly infiltrated Lebanese border territories in pursuit of what it called army defectors and armed gangs.

Rockets from Syrian clashes have also landed in Lebanese territories on various occasions.

dont call them lebanese, they are either farsis or wahabies

you sir are an idiot. Syrians killing Iranias? Are you sure you know what you farking talking about?

Fuck the Syrain army why dont they attack Israel instead of our people and their people .Slash Sayed Hassan is too busy trying to get out the shit he is in dude .

seems like the blast did not target a particular individual... this is an act of terror... we all are potential targets... potential victims... my heart is bleeding...

What is the situation there, I'm in Canada, our hearts are bleeding for our great Libnan

no Watch mouwwate el wateh ou ft sermeye accusing israel or al Quaeda though every single bone in their bodies knows that it was hizbolla ,following Bashars order and the blessing of el wateh Michel aoun.

This wasn't even mainstream news for the Lebanese government.

17 of their citizens were picked off on their neighbors border, and not a peep. Just goes to show you, what a joke Lebanon's government truly is. The government of Botswana and Zimbabwe would demand more clarification over the fate of their nationals.

hey guys why are we so busy yelling for something still vague... the thing is i don't like Hassan Nasrallah nickname HAS-NAS. i don't like the guy, and i don't like Hariri too, why? because they are fake. They give no shit about lebanon its either Saudi Arabia or Iran... when was the last time i heard somebody in this sorry country contend to be a true patriot. Wether it is Mouwaten or slah or william tell, i mean u no harm but u know i like billy the kid because he was a bandit proud of his achievements. He didn't fake. the problem with lebanese politics is that Nasrallah is working his arse to become a man with a suite where as Saadinio is doing his best to put a UFO trouser on

why is this news no longer being shown on TV or radio, has the bombing in achrafieh erased this event ? 17 people have been killed !?!?!?