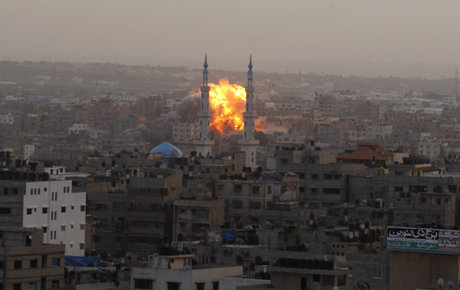 Israeli air strikes killed 35 Palestinians on Monday, hiking the Gaza death toll to 103 as global efforts to broker a truce to end the worst violence in four years gathered pace.

In the latest bloodshed, an Israeli missile killed a senior Islamic Jihad militant in a strike on a Gaza City tower housing Palestinian and international media, the Israeli army and militants said.

Israel's intelligence services said the strike targeted "senior Islamic Jihad officials" who were on the premises.

It was the second time in as many days that Israel had fired on the Shurouq Tower in the city's upscale Rimal neighborhood which is used by media outlets including Britain's Sky News, the Saudi-owned Al-Arabiya network, Russia Today and Iran's Press TV.

Smoke was seen billowing from the lower floors of the tower, also used by Hamas' Al-Aqsa TV whose offices were destroyed in the first strike on Sunday morning, officials said.

"One Palestinian was killed and three others injured in a strike on the Shurouq Tower," an ambulance services statement said.

Islamic Jihad sources named him as Ramez Harb and said he was a senior commander in its armed wing, the Al-Quds Brigades.

Three other people were hurt in the strike, including two cameraman -- one who works for Al-Arabiya.

"One person was killed and lots of people were injured. Now there's a fire on the second, third and four floors," Saed Swerky, Russia Today's Gaza correspondent told Agence France Presse by phone just after the attack.

"The Israelis warned the foreigners to leave this building yesterday because they were going to attack it again," he said, speaking from inside the building.

"In a joint activity between the Shin Bet and the IDF an attack was carried out on senior Islamic Jihad officials who were in the Shurouq building in Gaza City."

On Sunday morning, Israeli jets bombed two media facilities, including the Shurouq Tower, leaving at least eight journalists injured. One of them lost a leg.

Russia Today said its office was badly damaged in the incident, but none of its staff were hurt.

Israel's military defended the strike, saying it had targeted rooftop operational communications belonging to Hamas and had sought to minimize civilian casualties.

But the strikes were condemned by the local Foreign Press Association as well as international media watchdog Reporters Without Borders.

There was no immediate information on the identities of any of the victims.

Also during the afternoon, one person was killed and another two wounded when a missile struck a car just north of Gaza City, medics said. There were no immediate details on identity of the victims.

Another three people also succumbed to injuries sustained in the violence, but the health ministry could not immediately provide details on their identities.

Meanwhile, a missile hit a motorcycle east of Khan Younis in southern Gaza, killing two men and critically wounding a child who was with them, Gaza's ambulance service said.

In a strike on southern Gaza City, a car was hit, killing one man and injuring another three, officials said, naming him as 23-year-old Mohammed Shamalah.

Shortly before that, three people were killed in a strike on a car in Deir al-Balah in central Gaza, all of them from the same family: Amir Bashir, Tamal Bashir and Salah Bashir.

And medics said another man had been found dead in the northern town of Beit Lahiya, naming him as Abdel Rahman al-Atar, a 50-year-old farmer.

As the violence raged for a sixth day, ceasefire efforts gathered steam, with Hamas officials in Cairo saying Egyptian-led talks with Israel were "positive" but now focused on the need to guarantee any truce.

Desperate for a safe haven, many Gaza families have fled their homes in search of a safe place, with some seeking haven in the south, which has seen fewer strikes.

But they know nowhere is safe.

"My son Mohammed refuses to eat. He follows me everywhere because he's so scared and asks me every 10 minutes when we're going to die," said Umm Jihad, 37.

"He says he won't go back to school because he's scared he'll be martyred or that he'll come back from school and find that I or his brothers have been killed," she told Agence France Presse.

Mourners flocked to the funeral of nine members of one family killed in a weekend strike on a Gaza City home, the tiny bodies of the five children carried through the streets wrapped in Palestinian flags.

"Do children fire rockets?" shouted a man through a loudspeaker, as the crowd roared back: "No!"

The violence, which comes as Israel gears up for a general election on January 22, raised the specter of a broader Israeli military campaign like its 22-day Operation Cast Lead, launched at the end of December 2008.

Analysts say Israel's leadership appears satisfied with the success of Operation Pillar of Defense and that could it be ready for a ceasefire.

But the Jewish state has signaled it is ready to expand the operation.

And Gaza's Hamas rulers have been emboldened after securing the support of the recently installed Islamist governments of Egypt and Tunisia.

The overall death toll from the Israeli raids on the Palestinian territory hit 98, with another 21 people killed on Monday.

To date, the military has struck more than 1,350 targets in Gaza, and 640 rockets have crashed into southern Israel while another 324 have been intercepted.

The latest negotiations aimed at ending the conflict, conducted behind closed doors in Cairo, ended without agreement. But all sides have expressed a willingness to engage in more talks.

Hamas has demanded Israel lift its six-year siege of Gaza as a basic condition for a truce and is also understood to be seeking seeking guarantees Israel will stop its targeted killings, like the one which killed a top military commander on Wednesday, sparking the current round of hostilities.

The Jewish state has showed little sign of being ready to call off or even briefly halt its campaign, with Foreign Minister Avigdor Lieberman insisting "the first and absolute condition for a truce is stopping all fire from Gaza".

A string of international leaders have visited the region in recent days in a bid to end the bloodshed, with U.N. Secretary General Ban Ki-moon expected to arrive on Tuesday for two-days of talks with Israel and Palestinian leaders.

"I very much hope that during the coming days we can achieve cessation on a basis that stops the threat of missiles coming from Gaza, targeted at Israeli civilians and also then relieves the people of Gaza," he said in remarks broadcast on public radio.

German Foreign Minister Guido Westerwelle was also due to arrive in Jerusalem on Monday just days after Prime Minister Benjamin Netanyahu warned Israel was ready to "significantly expand" its operation.

On Monday morning, public radio reported that some 40,000 reservists were already massed near the Gaza border.

why are u so worried about gaza?.. They are nothing but trouble

It sounds to me that all the hits on vehicles are targeted to young men. Drones probably caught these guys trying to escape after firing missiles. That must be a creepy feeling ... waiting for the rocket that's going to come in through the windshield.

The Palestinians love to shoot rockets and then cry foul when Israel strikes back.

And Israel loves to strike from the air indiscriminately and then claim to be morally superior to anyone else.

I think it's a match made in hell!

you dont seem to have a better alternative for Israel to stop the rocket fire. When the US and UK kill civilians in Iraq and Afganistan and when Turkey kills Kurd civilians you dint see the same outcry. In Israel's case its an issue of self defense -- they have an obligation to protect their civilains from rocket fire. If the rockets stop so will the airstrikes.

arturo, if you look at the conflict with a 60 year perspective, and not a 60 day perspective, it's quite obvious that even when a lot before Hamas existed and before there were rockets, nothing or little was done to seek a permanent solution.
Today, when animosity and hate run so deep, it's ridiculous to blame one side only.
There are two stubborn bodies that don't recognize each other and don't want to understand each other.

Yarden,when the rockets are falling a 60 day prespective is appropriate. The priority is to get them stopped. After that the highly complex 60 years of history can and should be addressed. As Phillipo points out, Israel has tried in teh past w/o success to have a 2 state solution. Israel must continue to try, and try harder. But for now the objective to a halt to the rockets.

Yarden, aren't you forgetting the "peace talks" with Arafat when he was offered 97% of the West Bank and Gaza for a free, independent State of Palestine and he refused.
"nothing or little was done to seek a permanent solution"
Who refuses for over 2 years to sit down and talk peace with Israel ? Palestinian leader, Mohammed Abbas.
Who refuses to recognise the possibility of the existance of Israel ? Hamas leader Khalid Maashal.

hey for all the naives replyers !!!! you should know one thing, Israel is the one that created hamas and they know why hihi