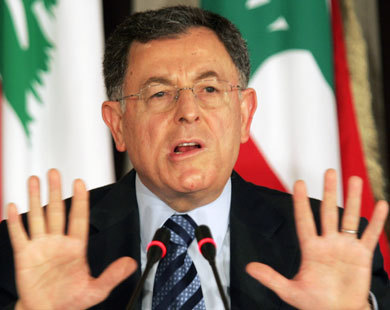 Mustaqbal bloc head MP Fouad Saniora stressed on Friday that the March 14-led opposition had presented “serious and acceptable” proposals over the national dialogue “contrary to what the other camp is claiming.”

He said: “The March 14 camp will return to the national dialogue once Hizbullah chief Sayyed Hassan Nasrallah announces his readiness to discuss incorporating his party's arms in the Lebanese state.”

Lebanese Forces leader Samir Geagea had declared in an open letter to President Michel Suleiman on Thursday: “Those preventing us from returning to the all-party talks are the same powers that you are making us sit alongside at the dialogue table.”

Saniora reiterated the opposition's demand for the resignation of the government and the formation of a neutral salvation one “that can confront the current extraordinary reality in Lebanon.”

The rejection of this proposal is a sign of some sides' insistence on maintaining their unilateral approach to running the country, he remarked.

“The current government is that of Hizbullah and the Syrian regime. It is working on achieving the party's local and regional interests, as well as protecting the regime in Syria,” added the MP.

The March 14 camp had announced its boycott of government-related work, including the national dialogue, in light of the assassination of Internal Security Forces Intelligence Bureau head Brigadier General Wissam al-Hasan on October 19.

It blamed the Syrian regime of being behind the crime and the government of covering up for the criminals.

The Phalange Party announced earlier this week however that it would not boycott the upcoming national dialogue session, set for January 7, explaining that it would not want to "boycott" President Michel Suleiman who called for the talks.

The Hezz only understand bombs from the sky.

Sayyed needs to sell-out/back-stab Iran and take all the gifted Iranian weapons and hand over to the LAF. He then should join forces and accept the terms of one army...one country! He should look to make Lebanon the envy of the Middle East and work towards peace, love and harmony between all Lebanese.

M8 will not discuss anything with you till you come up with the 11 billion USD you stole:)

Let's be realistic. Hizb TZ will not hand in their weapons because it's their only protection against all the murders they have committed.

What I want tiny Tim is a state where everyone abides by the law. Where people don't eliminate others just because they can. You can take you weak scare tactics and shove them. There will not be a civil war and your friends both Hizb TZ and ssnp will both be prosecuted for the murders they have committed. Go try and play that silly game with someone else.

Laugh all you want my friend. The day of reckoning is just around the corner. All who murdered fellow lebanese will have to answer for their crimes.

I will give you one theresistance. At least you are not insulting everyone's intelligence and denying that the hizb are behind many of the murders.

Bigjohn killing SSNP traitors is not a crime but a national duty..go and live in syria

agree with maroun.. they dont even believe in lebanon but a greater syria..they should be given the death penalty for treason..

When Syria implodes and the dictator is long gone, the filthy militia will come crawling like school boys

bigjohn, please ready my post carefully. never said anything about weapon or vanish

Row7a bala raj3a. Who needs to listen to your lies tiny Tim.

This focus on HA weapons is counterproductive. We should be focusing on HA's red lines instead. No to disarming palestininans. No to controlling the port. No to having a light government without too much employees. No to SSNP in lebanon. etc...

in other words:no dialogue till assad is out, is it difficult to caput?

The weapons must go, and payment for electricity must begin. The Shia are bankrupting us all.

Let me give you an example of WHY negotiation will never work with your type: http://en.wikipedia.org/wiki/Hassan_Khaled
This is why Aoun learned his lesson and sided with the Shabiha to avoid the car bomb.

I am a Shia who bankrupted the akhdar and the yabes. My name is Rafic Syria and I am Syria's best Rafic. I robbed the coffers by the amount of 60 billion USD before I was barbecued in 2005. Since then, my followers added to the bankruptcy the amount of 11 billion USD. Do you want a Coke or do you prefer a Pepsi? Thank you for your vast knowledge and intelligence. Lebanon's future rests on shoulders of bright people like you.

Row7a bala raj3a. Who needs to listen to your lies tiny Tim.

I'm extremely disappointed by Señora. How can he resume dialogue with an assassin? The man should at least do it for the fallen martyrs of Lebanon and sit with someone from Hizballah that doesn't have blood on his hands.

We should fire Berri, elect a real speaker of the house to write new laws to make it a national crime for accepting Money, Arms from friends or non friendly countries to undermine the role of the state authorities and appoint yourself the protector of your town/street.
You really want to fight the Zionists, then go to Gaza for the real show down, otherwise disarm NOW simply because you share the Country with others that disagree with your ideology.

"Those preventing us from returning to the all-party talks are the same powers that you are making us sit alongside at the dialogue table."

I feel sorry for you.

March 14, the majority of Lebanese do not understand Hebrew. So dialogue amongst yourselves to death, so to speak.

“The March 14 camp will return to the national dialogue once Hizbullah chief Sayyed Hassan Nasrallah announces his readiness to discuss incorporating his party's arms in the Lebanese state.”

The comments of a mad man ... He knows that discussions of this sort can not be implemented in the current state of affairs. For agreement on HA arms there would have to be trust and M14 has destroyed all trust with their inflammatory, hateful rhetoric.

As far as the HA arms it wasn't missiles that were used for assassinations. Maybe as a good faith gesture all the other militias and mobs should disarm first, including Hariri's militia ...

then the other side might as well arm... since trust is destroyed.. why have only one side with weapons??

sinioura is right...
a dialogue means talk about everything not just about what M8 wants... otherwise it is a M8 monologue so no need to attend such a farce....

but of course M8 believe more in a party than in their own state which they prefer to weaken by the threat of hezbi arms rather than leave the NATIONAL army take care of the defense of the country and put hezbollah under the ORDERS of the army and not the other way round!!!!!!

take your filthy biased bull somewhere else bigjohn... first off there was resistance against israel prior to HA.. but HA took them out of the picture one by one... why? is it an obligation to have a monopoly on resistance for it to be successful? was it an act of resisting israel when they appeared with black shirts to change jonblats mind?? why do we have to take iranian orders and thats ok in your book..?? pathetic..

You're sick with your BS.... There's no such thing as a sect being the descendant of the Phoenicians... This is big BS. Respecting the Shias sure, but that's about it.