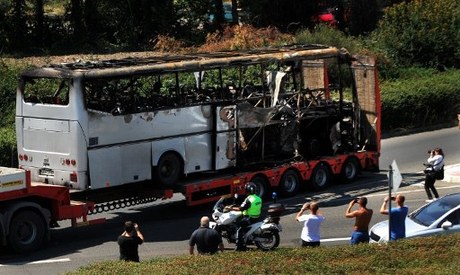 Bulgarian officials have removed a senior investigator from a probe into a tourist bus bomb attack that killed five Israelis, after she revealed sensitive information to the media, BTA news agency reported Monday.

Stanelia Karadzhova, head of the regional investigation unit in Burgas, where last July's attack took place, had been taken off the case, the state news agency reported.

Karadzhova had released details of the investigation without clearing it with the supervising prosecutor, BTA reported, citing a statement from the prosecutors' office.

Karadzhova told the 24 Hours daily newspaper in a January 3 interview that Sofia had identified and issued an arrest warrant for one of the accomplices of the man who blew up an Israeli-packed tourist bus, killing five tourists, their Bulgarian driver and himself.

"The investigation has evidence implicating three people," she told the paper. "The identity of one of them has already been established. He is currently being searched for."

The investigator gave many other details on the probe in the two-page interview.

While Bulgaria's interior ministry has not officially refuted the information, the ministry's chief of staff Kalin Georgiev warned that any comments on the investigation at this stage were "dangerous".

Almost six months after the July 18 attack, Sofia is struggling to identify the actual bomber, despite having his DNA, fingerprints and a computer-generated portrait.

This has prevented Bulgaria from pointing the finger at anyone so far.

Immediately after the attack, Israel blamed Iran and its "terrorist proxy" Hezbollah, the Lebanese militia movement, for the bombing.

Iran has denied any involvement.