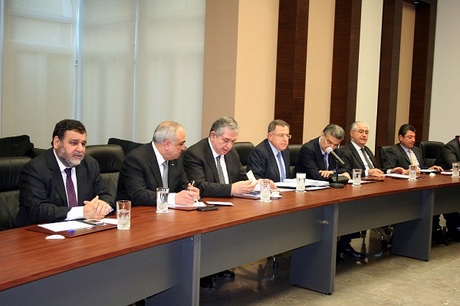 Al-Mustaqbal parliamentary bloc on Tuesday rejected calls voiced by Lebanese Sunni clerics for “jihad” in the Syrian region of Qusayr, while urging Hizbullah to “withdraw its fighters” from the war-torn country.

In a statement issued after its weekly meeting, the bloc said the line-up of Prime Minister-designate Tammam Salam's cabinet "must be based on the rotation of portfolios" among the various political parties.

"All obstacles must be removed in order to form a cabinet comprising no MP hopefuls," the bloc added.

Al-Mustaqbal strongly rejected a possible postponement of the parliamentary elections, saying that would represent "a dangerous deterioration that could turn Lebanon into a failed state."

The bloc announced its openness to "all efforts aimed at reaching an electoral law that can secure the transition of the country to a new phase."

Turning to the issue of the recent cross-border rocket attacks launched by Syrian rebels against the Hermel region, the bloc said it "condemns and rejects the shelling of Lebanese territory in the North and the Bekaa at the hands of any party, be it the regime or the opposition."

It called for deploying the Lebanese army on the border and seeking U.N. assistance in order to "rein in Hizbullah's adventures and the violations of the regime and the opposition."

Al-Mustaqbal condemned "Hizbullah's increasing involvement in Syria under flimsy excuses which do not justify the crime being committed against Syria and its people," noting that Hizbullah "has lost its cause and put its arms in the service of regional interests that contradict with Lebanon's interests."

“Hizbullah's involvement in Syria proves that the role of its weapons is to serve Iran's expansionist schemes,” the bloc added.

“We call on Hizbullah to immediately withdraw its fighters from Syria, as the place of Lebanon's youths is among their people and it is unacceptable to put them in a confrontation with the Syrian people,” it said.

The bloc noted that “the heinous crime being committed by Hizbullah has led to rejected calls in Sidon and Tripoli for participation in the fighting in Syria.”

“We do not accept the participation of Lebanese youths in the fighting in Syria, as the Syrian people need aid, not fighters,” it said.

Islamist clerics Sheikh Ahmed al-Asir and Sheikh Salem al-Rafehi on Monday announced that they have decided to send fighters and weapons to Syria's Qusayr.

Separately, al-Mustaqbal noted that the abduction of two bishops near the northern Syrian city of Aleppo “serves the interests of the criminal regime that is killing its own people, and whoever is behind it is playing a role in the destruction of Syria."

Al-Mustaqbal reiterated its call for the release of nine Lebanese Shiite pilgrims abducted in Syria's Aazaz.

"We appreciate the suffering of their families and call on everyone to exert all efforts possible to speed up their release, but the step of attacking Turkish interests is rejected, ineffective and will reflect negatively on Lebanon," it added.

no your arrogance blinds you... good, coz you won t see it coming... lol!

Let's admit it, these calls for Jihad are a joke. If HA in syria is really tipping the balance, what few amateur jihadists are going to do about it.

mustaqbal liar zionists can go get bent along with iran and russia.
you will be next after we exterminate the enemy from the east you hypocrites.

we are under attack.....dont worry, stand with us and we will protect you as a brother.
bear arms against us and you become an enemy.