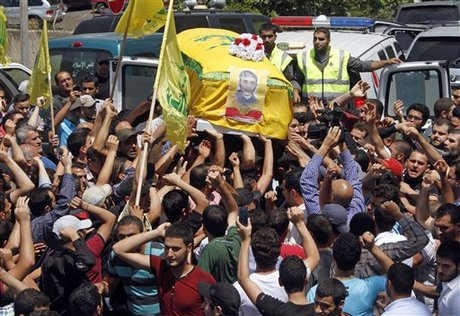 Twenty-two Hizbullah members were killed in fighting alongside Syrian government forces against rebels for control of the town of Qusayr, a source close to the Lebanese group said on Sunday.

"There were 22 killed on Saturday. Nine bodies were repatriated the same day and the rest on Sunday," the source said, declining to be named.

The source also said regime forces backed by fighters of Hizbullah control 80 percent of the strategic town of Qusayr.

"We still have to take another 20 percent of Qusayr, since we took 10 percent on Sunday and the rest was already in our hands," the source said, declining to be named.

In addition, "the main road between (Lebanon's) Baalbek and (Syria's) Homs has been secured," he said, referring to a vital artery through which the Lebanese group sends men and equipment to Syria.

The Syrian army announced that on Saturday its forces had infiltrated Dabaa military airport, a rebel post north of Qusayr, a week into a Hizbullah-backed offensive to recapture the strategic central town near the Lebanese border.

"Fighting is taking place inside the airport after they broke the rebel defense lines," an army source said.

The source close to Hizbullah said the armed group has now lost a total of almost 110 fighters since it joined the battle in Syria several months ago, with most of the deaths in and around Qusayr.

According to the Syrian Observatory for Human Rights, Hizbullah lost 10 fighters in Qusayr on Saturday, out of a total of 147 people killed in violence across Syria, including 79 rebels, 32 soldiers and 26 civilians.

that makes around 1500 new virgins on the market in heaven! pschhhhh

Shou, ba3d ma "7arraro" Qusayr? What's the matter HA? Not exactly the cake walk you tought it would be?

Here's the spirit of the Taef Accord: accept Shia slavery (whether you are Sunni, Shia, or Christian) as the Lebanon law because the rich "white" foreigners will look at you like you're weird if you defy their party line. Plus they won't give you free bags of potato chips anymore.

Nasrallah the other day promised, I don't know who, but he promised his people, that he would deliver them another victory like the one in the July War of 2006. You know, the Devine Victory. I am sure that the Shiite people who call themselves his sheep remember what happened to them back then, and just can't wait for a repeat of the death and destruction and for what? What was gained in July 2006? Nothing was gained. What will come of this war in Qaisar?? Even if they take the town, the Regime forces have a sorry history of holding territory once gained. The FSA will return and take it back if it is lost. But after a week, the Hezbollah fighters are still coming back to Lebanon in Hezbollah draped boxes. Such a shame that these young men are being sacrificed and for what?? $1,000 for their families. Is that all that their lives are worth?

He will send thousands of ' mujahedeen' not to liberate Sheba farms , astaghferulah, but to liberate Syria from the Syrians. The US drones 'takfiris' all over the world but somehow they are allies in Syria ( At the same time preventing any weapons from the rebels), this is the teben that nasrala wants his community to swallow with their angry and grief over their dead

Perhaps, the time has come to deport Shiites back to Iraq and Iran. That's where they're from. They have no Phoenician blood, not a single drop.

You can't and shouldnt think like Adolphe. The leadership is the cause, not the poor and innocent people. Keep in mind tha as soon as someone wants to open a new political faction for the Shias, hezb Ebola makes sure they avort. Shiites are the victims of their own tyrants in Lebanon and Tehran.

waw! now FT knows how god himself think! no wonder FPM and hezbis suffer from a complex of superiority....

i see no fault in hizballah marionettes dying,let them be removed from the world,may all of them go to hell

22 killed in one day, but 75 for the whole conflict. someone's numbers are WAY off.

true ..The hizb are covering up there loses.

I look at you lebanese from a distance and I'm in awe. You kill eachother over insignificant religious nuances, though you all call yourself muslims. You fixate on shaaba farms as if its sacred, when itis in fact a tiny piece of dirt. From what I understand, the Israelis dont even claim it, but dont know who it belongs to, syria or lebanon. But you need a reason to hate them. You applaud the "resistance", when in truth there is nothing to resist if hezb kept its mouth shut and didn't threaten Israel every day. You have a rich stable tech savvy neighbor who would love to do business with you, but you applaud the "resistance"who threatens them. Threats, that if acted upon, would mean leabanons destruction, since whatever damage lebanon could inflict upon Israel, would be inflicted on lebanon a hundred fold. Why dont you make peace with Israel, ignore syria, and prosper as you did before you got caught up in this sectarian nonsense.

hassan the rat thinks he will walk over the rebels..he doesn't know he is the attacker and casualties will be very high and it will be the end of the hizb if they don't pull out of Syria ..defending your country and attacking another are two different things .