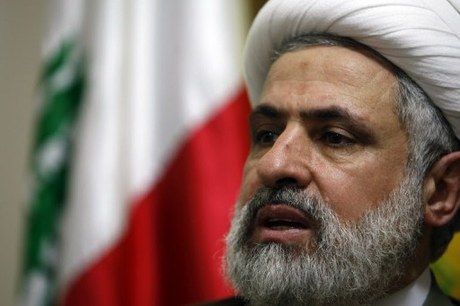 Hizbullah stated on Wednesday that the party's “achievement” in the Syrian border town of al-Qusayr dealt a “severe blow to the American-Israeli-Takfiri scheme.”

"The withdrawal of the opposition's fighters from al-Qusayr is a knockdown to the scheme of the United States, Israel and the Takfiris,” the party's deputy chief Sheikh Naim Qassem expressed after a meeting with Syrian Social National Party Vice President Toufiq Mhanna.

He added: “The battle today has one goal only which is to face Israel and those serving its interest. Hizbullah's stances are based on this.”

"Today it has been proven that betting on the fall of a Syria that supports the resistance is a delusion and a failure, so is choosing political stances based on the achievements of the American-Israeli scheme.”

Qassem reiterated calls for finding a political solution to the Syrian crisis, rejecting international powers' “attempts to take over lands in the Arab world and support Israel.”

“The region's people have set their minds on recovering their lands and their rights,” he assured.

Syria's rebels conceded on Tuesday they had lost the battle for the strategic town of Qusayr but vowed to fight “thousands of Lebanese mercenaries” after the army seized total control of it and the surrounding region.

The main opposition National Coalition shrugged off the defeat, declaring the "revolution will continue".

Tuesday's development comes after the military support of Hizbullah has helped Syrian regime forces gain the upper hand in the battle for control of Qusayr, where an army assault began last month, amid a Lebanese, regional and international outcry.

But during a May 25 speech marking the 13th anniversary of Israel's military withdrawal from Lebanon, Nasrallah said the Takfiris are the “most prevailing group in the Syrian opposition,” warning against a defeat against them in the ongoing war in Syria.

He said: “If Syria falls in the hands of the Takfiris and the United States, the resistance will become under a siege and Israel will enter Lebanon. If Syria falls, the Palestinian cause will be lost.”

Look at the Bright side: with the fall of Qusayr, Syria is getting closer to getting partitioned along Alawite - Sunni lines. This will leaves us with a weakened Syria less prone to mischief in Lebanon. Good news for us maybe.

Uuuh, wake up call: Assad couldn't overrun a little town like Qusayr without the help of mercenaries from Lebanon... Retaking control of Syria would be a strech.

"What they have done to us"? You are obviously too young to have experienced it. Good luck to you and you idol Assad.

A blow to Israel. If Israel wanted Assad gone, they would at least send them weapons ya

How pathetic let alone a delusional world these turban-wearing cavemen live. Kind of reminds you of pre-inaliation frame of mind that Saddam had when crossing the line on Kuwait. Just wait a bit and you will see these worthless satanic cults aka HA be wiped out. They will not know what hit them. They will go down like a deck of cards chanting 'allah akkbar" but little do they know God is waiting for them with a one way ticket to hell!

Haha stop smoking pot man u are ridiculous! Well done to the syrian regime and its allies!

Het ready for a big war bigsami, retaliation will have a sour taste for evey Lebanese caring about his country. FSA will rightfully attack the terroristas in their hometowns here n Lebanon.

Yeah the syrian army is so tough. If America really chose to get involved they would wipe out bashar's entire army in about 2 hours so I wouldn't brag too much

Phil. He is a scum. But there is no option for partition. It seems that the Hizb has dragged the region into a Sunni-Shia war that may last decades. Shame of the Hizb and Iran.

yeah they don't want sectarian strife, they just want to invade a neighboring country and kill sunnis who are fighting from their freedom and did not ask for a fight with them. I'm sure it's just a coincidence that shia iran, shia hezbollah and shia/alawite baathists are all teaming up to kill sunnis....

The FSA threatened to attack Hezbollah long before Hezbollah entered Syria. They're just getting what they wished for.

yeah and how many of those 70% already defected? And why did bashar keep many of these sunnis in their barracks? Perhaps because he knows they will defect and they will refuse to shoot innocent protestors like they have been doing for 2 years....get ur head out of ur a$$

josh bustany i enjoy reading your post more then anybody else...keep up the good work !!!

"Heavy gunfire erupted in Rowaisat-al-Zoaiteriyeh in celebration of Qusayr's fall as convoys roamed the area."

The settlers are celebrating.

Al Qusayr one of the many temporary criminal acts the terrorist organisation of Hizbollah will be called to pay for, along with Hariri assassination, the 2006 foolish war, may 2007, Argentina, Azerbaidjian Bulgaria, Egypt , Thailand, etc...to include all the criminal activities commited in the 80's by one of their turned-dust lieutenant, Imad Mughanyieh, and others... Will laugh , who will be last to laugh ! Some day the FSA will come to pay a complimentary visit to Dahyé. We will rejoyce then !

I congratulate on this victory to Hezbollah and every peace loving and free person in the world.
For M 14, after this battle Hezbollah really lost the hearts and minds of all the narrow-minded, sectarian, heart eaters Nusra mules in the Arab world that never liked Hezbollah since the beginning.
Today every free person of the world is happy specially free Muslims and Christians of the world.

good news and bad news. Good because takfiris were defeated.Good because it is over. Bad because the absolute biggest ennemy of lebanon, Assad won. Bad because HA is going to end up emboldened and even more arrogant. Allah yse3idnah 3leyon.

Of course Ibn el jabal.
Winning a battle is one thing.
Dealing with the FSA "resistance" is something else. It will be one resistance resisting another resistance!!
HA is a guerilla. It will cost it too much to hold qusair. Plus in a few months time, resisting to keep qusair will not appear as sexy as now, and HA will be spread too thin. So they will lose this war...

Lebanon is gone... If this idiot thinks this way.... I was going to Lebanon this year, now it is over...

I believe HA, IRAN and ISRAEL are all in together on this. If USA wanted ASSAD gone they would have done it similar to Qadafi. They don't want him gone, they just want the whole region to stay in a war zone.

May the gulf countries kick out every Shia that supports Hizballa. Throw them into the sea and let them swim to Iran. Filthy terroristas.

Lets seen how many Sunni they have have executed in Qusayr with their chemical weapons.

a blow to americans? LOL they along with israel are letting assad in power for their interests... he would have been long gone otherwise! 2 years of american procrastination proves that the US are leaving him in power!
israel allied now with salafis? the same one they are fighting in palestine? what a joke!

assad has NEVER scared israel... read you history books and cut the BS.....

Qusayr "achievement" only a blow for freedom of expression and Human rights and peace in the region. 3afékon ya shatreen. Ashraf el nès saffa7i al abriya2.

What American-Israeli? The root of the problem is you and your religious intolerance on both sides! Stop blaming others for your bad deeds and stupidity. The Muslim/Arabs have been on each others throats for thousands of years. Who are you going to blame if Israel did not exist? Notwithstanding the Palestinian issue, what does Israel have to do with your vulgarity and intolerance towards even other Muslims let alone different faith. If the Arab League cares so much about the Palestinians, you morons having all the oil money, take the Palestinian from the Lebanese camps along with their weapons and do whatever you like. Use them as your army, work force, etc. Just leave Lebanon alone of your vulgarities.

how many americans and jews did they kill in Qusayr's...none what a joke..

“severe blow to the American-Israeli-Takfiri scheme.”... what a joke, the Israelis would like nothing better then to have their pal Assad protecting their border for another 40 years. Hizbullah and company are talking endless crap, you are fighting in Syria because your Iranian pay master told you to do so!

Wow what an achievement all of Hizb Allah and Syrian military might supported by air strikes to take a town of 20 thousand? So tough. And they threaten with Israel with retaliation always on the next attack, never on the one that already happened. If Israel or the US actually wanted Assad to fall they could set up a no fly zone in a day and stop all air strikes and weapons deliveries by air. Of course they'd rather watch Assad,Hizb Allah and Takfiris kill each other instead...

p.A.r.T.i.T.i.O.n always ...
Muslims are welcome around the world in all christian countries and are treated equal,but the reverse of it is not true! Muslims(the majority)treat Christians as ennemies (some by ignorance, and some by envy)

'During the reporter’s visit, before Qusayr fell, the rebels proudly described the preparations that had allowed their outnumbered force to hold off the assault for longer than expected: tunnels that enabled them to slip in and out of the town; underground command rooms stocked with food, water and drugs; booby traps and mines; even cameras that monitored their attackers.

“We got this experience from Hezbollah’s tactics against the Israelis,”' NY Times.

That explains why they were able to withstand the Syrian Army's siege for months -- a resistance approach. Can't beat the master with his own tricks, though.