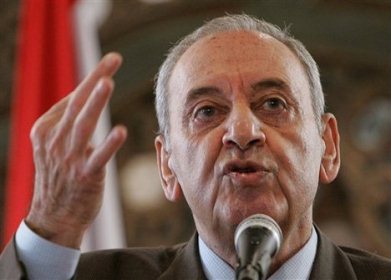 Speaker Nabih Berri is scheduled to make speech on Saturday afternoon to mark the 35th anniversary of the disappearance of Imam Moussa Sadr and his two companions, reported al-Liwaa newspaper on Saturday.

Parliamentary sources revealed that the speaker is expected to announce that “he no longer seeks to be politically affiliated with any authority in Lebanon, especially the March 8 and 14 camps.”

They added that he will not present any initiative to end the political deadlock in Lebanon.

The speech is expected to highlight the dangers facing Lebanon given the tense regional situation and therefore stress the need to form a political government that unites all parties, added al-Liwaa.

Berri will also warn against falling victim to attempts to create Sunni-Shiite strife in Lebanon.

The sources added that he will address the regional situation and the repercussions a western strike against Syria may have on Lebanon.

Berri's speech is scheduled for 5:30 on Saturday afternoon.

On August 23, two powerful blasts rocked the northern city of Tripoli, killing 45 people and wounding over 800 others.

These attacks came eight days after 27 people were killed and around 300 wounded in a car bombing that rocked the Beirut southern suburb of Ruwais, a Hizbullah bastion.

Revered by Lebanon's Shiites as a key spiritual and political guide, Sadr vanished in 1978 amid mysterious circumstances and was last seen in Libya where he was invited by slain leader Moammar Gadhafi.

At the time, Sadr was trying to negotiate an end to the Lebanese civil war (1975-1990), in which Palestinian factions were involved.

“he no longer seeks to be politically affiliated with any authority in Lebanon, especially the March 8 and 14 camps”... then stress the need to form a political government that unites all parties... Berri must be taking lessons from General Flip Flop, what ever happened to the New Front Aoun was rambling about?

There is a reason why no one trusts him, and coincidentally why he is the longest serving elected official in the arab world. He changes his mind to suit HIS needs and his only--he cares not about the country he represents.

And anyone for passing a term limit law saying that a person can't serve more than 10 years TOTAL in government.

don't know--probably not hizb iran at this point in time, but maybe someone from one of the other 'minor' parties.

All I know that FM and LF feel they got stabbed in the back by him, Hizb iran saw all the comments he made about them from wikileaks, and FPM and he just parted ways recently.

who does he have left?

Does this mean the paychecks from the land of Persia will stop coming in?

it is berri's way of saying he is against involvment of HA in syria. He doesnt have the political power to say it loud, but he has to do something.

This is nothing but Iran Logic-101. You bankrupt and defunct your corporation, form a new one under a new name and do business as usual under the new shiny name. So, what's your problem! Who are you kidding? I mean I don't blame him/them, I blame the people who empower these types of depraved people to run our lives and the business of running the country.