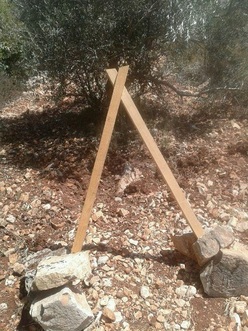 Two rocket launchpads were found Sunday in the southern region of Tyre, from which two rockets were fired overnight Saturday at northern Israel.

“At 22:30 on Saturday unknown assailants fired two rockets from Dheira town”, three kilometers (nearly two miles) from the border with Israel, the army said in communique on Sunday.

“The army inspected the area locating two metallic launch pads used in the firing of the rockets,” the army said in a statement.

An investigation was launched to unveil the circumstances of the incidents in cooperation with the United Nations Interim Force in Lebanon (UNIFIL).

The two rockets were fired on the 47th day of a war against the Islamist movement Hamas in and around Gaza.

The Israeli army said that a rocket had hit the Upper Galilee.

There was no immediate claim of responsibility for the launch or reports of damage or injuries.

In an interview with state-run National News Agency, UNIFIL Commander Major-General Luciano Portolano strongly condemned the rocket fire, describing it as a dangerous violation of U.N. Security Council Resolution 1701, which ended the 2006 war between Israel and Hizbullah.

He warned that such “extremist” acts do not only put the lives of innocents in danger but can also undermine stability in southern Lebanon and along the U.N.-demarcated Blue Line.

Portolano, however, lauded the “restraint” shown by the various parties in the wake of the incident and their cooperation with UNIFIL.

The general also highlighted the importance of identifying and prosecuting the perpetrators.

In mid-July, at least nine rockets were fired from Lebanon at Israel, prompting Tel Aviv to retaliate with artillery fire.

Lebanese military officials had at the time said they believed the attacks were carried out by a small Palestinian group in an act of solidarity with Gazan militants.

This is a direct assault on the resistance. I wonder when the Hizb will invade Beirut again and overthrow the government?

Its THEIR government now, it wont happen.

They make sure to announce that its not HA to blame ,they dont want more hostilities from Israel

What a strategic finding. Two wooden pieces of 2x4 nailed together on one end and supported by few rocks.