Hamas Calls on Damascus to Release its 'Grip on Camps, Syrian Brothers' 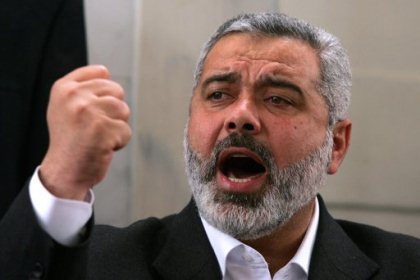 Ismail Haniya, head of the Hamas government in Gaza, on Friday called on Syrian President Bashar Assad's regime to release its "grip" on Palestinians staying in camps in Syria and on "Syrian brothers seeking their freedom and dignity."

"We feel the pain of our (Palestinian) people in camps in Syria, of martyrs and wounded ... May the criminal hand release its grip on children of our Palestinian people in Syria," Haniya said in his sermon for the Muslim holiday of Eid al-Adha.

Damascus has in the past supported Hamas by offering facilities in Syria but the Palestinian Islamist movement has backed Syrian rebels after the Palestinian refugee camps in the country became targets of bombings.

The ties between the two further ruptured following an attack against Khaled Meshaal, the political bureau head of Hamas, on Syrian television.

Separately, Haniya accused Israel of an attack against a military factory in Sudan.

"On my own behalf and on behalf of the government, we condemn the Zionist terrorism behind the bombing of a (military) factory in Sudan. We condemn this crime and this terrorism," Haniya said.

The attack "proves once again that Israel is an outlaw state sponsoring terrorism in the region and in the world."

On Thursday, a senior Israeli defense ministry official called Sudan a "dangerous terrorist state," without denying or claiming the bombing of the factory.

In April 2011, Sudan also accused Israel of being behind a mysterious air raid against a vehicle that killed two in Port Sudan.

Israel did not comment on it and a similar raid was carried out by a foreign aircraft on a weapons convoy in eastern Sudan in January 2009.

can someone explain to me please:

Is Israel a scapegoat in the great Shiaa-Sunni conflict?

so mr haniya how much money did qatar gives you so you can turn your back on syria,who for the last 20 years protected your leader and financed you to fight israel.shame on you.

waw! the organization praised by hezbis now supports the "terrorists"! it will anger our little bashar supporters here !