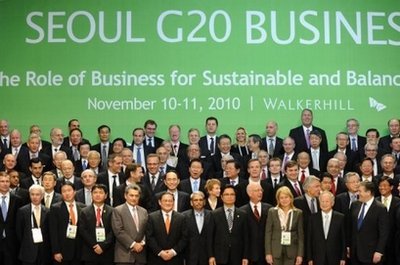 The world's biggest rich and emerging powers escalated a war of words over trade and currencies Thursday, as leaders opened a G20 summit struggling to iron out distortions that threaten global growth.

The United States, striving to recover from its worst economic crisis in decades, locked horns anew with exporting giants China and Germany over a plan to rebalance skewed commerce between deficit and surplus countries.

President Barack Obama, grafting to salvage a deal at the G20 after suffering an economy-linked drubbing in U.S. elections last week, said his administration wanted to boost growth via "prudent" economic policies.

"I don't think this is a controversial proposition."

But controversy is rife in the G20 after the Federal Reserve instituted a 600-billion-dollar attempt to reflate the U.S. economy, in a radical monetary step that foreign critics say will trigger tit-for-tat currency devaluations.

In separate bilateral meetings with Obama, the Chinese and German leaders both talked up prospects for an eventual agreement to rebalance the world economy -- but stressed that action was needed by all.

"I believe that with the concerted efforts of all the parties, the summit in Seoul will produce positive outcomes," Chinese President Hu Jintao said.

Canadian Prime Minister Stephen Harper, however, said he was "not sure" about a G20 deal on imbalances, which he stressed "do have to be resolved".

Ahead of her meeting with the U.S. president, German Chancellor Angela Merkel lashed out at a U.S. plan to rectify the imbalances by limiting the surpluses of big exporters.

The United States wants the G20 to agree to curtail "excessive imbalances" in world trade as a back-door way of forcing China to realign its currency, which critics say is kept deliberately cheap to support Chinese exporters.

But the proposal has run into trouble not just from China but from an array of nations including Germany, an export champion that insists its own trading prowess has nothing to do with any currency chicanery.

"To set political limits on trade surpluses and deficits is neither economically justified nor politically appropriate," Merkel told a G20 business summit.

In Beijing, the National Bureau of Statistics announced that China's consumer inflation was now running at its fastest pace in more than two years -- and an NBS spokesman said that would only worsen under the Fed's stimulus.

Emerging economies around the world are worried that the new Fed money will stoke speculative flows of foot-loose "hot money", and some are resorting to capital controls in a bid to stem the tide.

There is anxiety that G20 nations could be heading for a return to 1930s-style trade protectionism, with damning consequences for the world economy two years after the start of the global financial crisis.

Japanese Prime Minister Naoto Kan said the risk was of "competitive devaluation of currencies reminiscent of the Great Depression".

Brazilian President Luiz Inacio Lula da Silva said the world economy was headed for "bankruptcy" unless rich nations raise consumer demand rather than relying on exports to power their recoveries.

"We have to do everything to avoid protectionism," Merkel stressed, in a call taken up by business leaders meeting on the G20 margins whose companies have combined total sales of more than four trillion dollars.

At best, South Korean officials have suggested, the G20 may settle for a watered-down deal to task the International Monetary Fund (IMF) with crafting guidelines to trim the yawning imbalances between creditor and debtor nations.

Tired and fractious negotiators have been meeting long into the night all week in Seoul to try to pin down language that the G20 leaders can adopt in a closing communique on Friday.