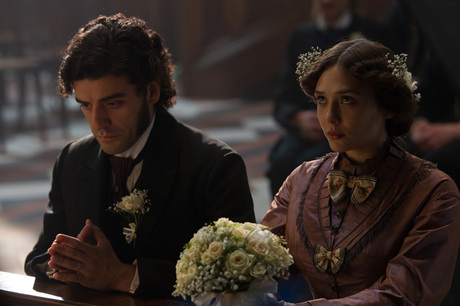 I wish “In Secret” came out in time for Valentine’s day. An adaptation of Emile Zola’s classic novel Thérèse Raquin, the film manages to overcome its flaws to be an entertaining and engaging period drama. It’s far from perfect, but it benefits from a really strong first half and some pretty solid performances.

The story is set in 1860s Paris. Thérèse Raquin (Elizabeth Olsen) is a beautiful young woman living with her aunt, Madame Raquin (Jessica Lange), and is tasked with looking after her sick cousin, Camille (Tom Felton). Thérèse eventually learns that she’s to marry Camille and move to the city. As they begin to settle into their new life in Paris, Thérèse meets Camille’s work colleague and artist, Laurent (Oscar Isaac). The two have undeniable sexual chemistry which leads to an illicit affair, and ultimately, a plot to get rid of Camille for good. The film then deals with the psychological aftermath of the couple’s crime and asks if you can really go on after committing such a heinous act.

Directed by Charlie Stratton, the film undeniably looks great, and really benefits from Zola’s beautiful but twisted tale. I haven’t read the original story, but the film does a fine job at somewhat rationalizing Thérèse’s desire to get away from Camille, even if it means killing him. Thanks to some great performances, the sexual tension between Oscar Isaac and Elizabeth Olsen can be palpable, so the idea that they’d go so far to be together isn’t that far-fetched. Tom Felton is fine as Camille, but his character is so silly and childish that most of what he says or does comes off as comedic.

The film’s second half is what kept me from getting more engaged. As soon as Camille is killed, Thérèse and Laurent turn on each other and begin resenting one another for what they did. I know the point of it is to show that Thérèse only really enjoyed being with Laurent when Camille was alive, but instead of slowly building to that, it happens really abruptly. What ensues isn’t all that surprising, so it lacks any emotional impact. Speaking of emotional impact, you’ll probably find it hard to relate to any of the characters in the film. I still disliked Jessica Lange’s character, Madame Raquin, even after she’d become a victim and someone we could maybe root for.

“In Secret” is an often dark and fun period drama that, while flawed, is still worth seeing.