Everyone Praises Green Copenhagen. But What If Your City Has 20M people? 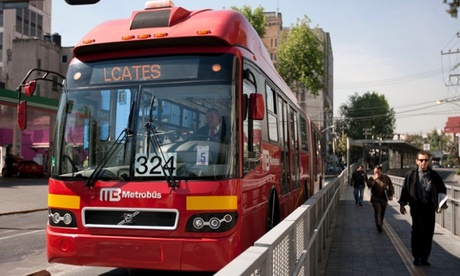 “There will be roughly 1 billion more people living in cities by 2030,” said Buenos Aires mayor Mauricio Macri at the C40 Latin American Mayors Forum in the Argentinian capital last week. “Which is equivalent to creating a Buenos Aires-sized city every three weeks for the next 15 years.” The big question, as Macri and other mayors agreed at the forum, is: how do cities accommodate this high population expansion in a sustainable way?

We often hear the looming figure that 70% of the world’s population will be living in cities by 2050 – yet that’s a milestone Latin America has already reached. It is the most urbanised region in the world. Do its cities champion ideas that are up to the task of cutting greenhouse gas emissions and enhancing climate change resilience? Judge for yourself.

1. Climate resilience is not bad for the economy

“It’s a false dilemma,” Felipe Calderón, the former president of Mexico, told the gathering. While many governments shy away from cutting greenhouse gas emissions for economic reasons, Calderón argued that renewable, low-carbon options can actually generate far greater economic growth in the long run. And they’re not as costly as they once were. “The cost of solar energy has reduced by around 90% since the 1990s,” he pointed out. “Renewables are now highly competitive.”

Committing to increasing sustainability is not enough: cities need to act quickly. “We need to be faster in the implementation of climate resilience strategies,” argued the mayor of Mexico City, Miguel Mancera. His city recently kicked off a 2014-2020 climate action program, which promises to reduce pollutant emissions in the metropolitan area by 30% over six years. Since the program started in June 2014, he claimed CO2 has already been cut by 1m tons.

Of course, investment is a critical part of this, and many mayors called on national governments to support them in funding renewable energies and low-carbon infrastructure. Rio de Janeiro’s mayor, Eduardo Paes, argued that incentives were needed for the private sector to invest in sustainable, climate-resilient cities.

3. We need a transport revolution

Mexico City is one of the most polluted cities in the world – and 56% of its emissions are from transport. As we look to mature beyond the dominance of the private car, rethinking our urban transport is a clear focus for climate resilience – in both Latin American cities and around the world. As Felipe Calderón outlined, the benefits of cleaner and collective transport go beyond decelerating climate change: there are huge economic and health costs of polluting traffic in cities. “It is critical to reduce car use,” he urged. “No big city in the world is complying with air pollution limits.”

Efficient public transport is one part of this transport evolution; safe cycling infrastructure, pedestrianization and electric vehicles are also critical. Latin America is well known for the widespread use of Bus Rapid Transit (BRT) systems, which originated in the Brazilian city of Curitiba. Curitiba continues to innovate with micro electric cars, as well as electric taxis and buses – in addition to expanding their BRT and improving cycling infrastructure. Mexico City is currently expanding their Metrobus network as well as their metro system.

In 2013, Buenos Aires transformed its car-dominated 20-lane wide Avenida 9 de Julio in the city center by giving over the 4 central lanes to a Metrobus system, which – according to the city government – saves the equivalent of 5,612 tons of C02 emissions annually. The Argentinian capital’s protected bicycle lanes (“bicisendas”), introduced in 2009, now span 138km and the city’s bike-share scheme, the first in Argentina when it began in 2010, currently has over 140,000 registered users. By improving cycle provision and infrastructure, the city has seen bicycle use increase greatly.

Encouraging walking is another part of curbing car use. “We need to instil a greater respect for the pedestrian,” urged the mayor of Quito, who is pedestrianizing areas of the city in addition to expanding its network of bike lanes and adding electric bikes to their bike share program.

Latin American cities including Quito, Buenos Aires, Rio de Janeiro and Mexico City also joined C40 cities around the world to sign the Clean Bus Declaration of Intent, expressing a commitment to reduce emissions and improve air quality through the introduction of low- and zero-emission buses in their city fleets.

4. Get better at waste

Landfills contribute to greenhouse gas emissions – and transporting waste to these landfills contributes further to pollution. As populations and resultant consumption grows, efficient waste management was agreed to be a vital part of more sustainable cities.

The Climate and Clean Air Coalition to Reduce Short-Lived Climate Pollutants (CCAC) is working with cities including Rio de Janeiro and São Paulo on the Municipal Solid Waste (MSW) initiative which aims to reduce methane and air pollution through the dissemination and implementation of best practice waste management policies and strategies such as closing open dumps and capturing landfill gas.

São Paulo’s creation of a solid waste management plan has been a participatory process, promoting a practice of “shared responsibility” as well as maximum recovery of waste. The city now has two recycling plants receiving 250 tonnes of waste per day; there is also a recycling fund for 1200 cooperatives and organic waste management is incentivized. Impressive stuff – though São Paulo certainly has other pressing issues that need addressing.

“The traditional model of urban expansion is no longer sustainable,” Felipe Calderón announced. While a contentious topic in the London housing crisis debate, the UK capital’s green belt was praised by Latin American leaders as a positive strategy for curbing the risk of limitless urban expansion. Compact cities, it was argued, increase energy efficiency, maximize land use, reduce traveling distances within the city (then reducing the need for individual car use if public transport is in place) - as well as preserving nature.

Of course with the anticipated rate of urbanization and population expansion, compact cities mean much denser cities. While compact (and relatively low population) European cities like Copenhagen were praised as a positive model, it was admitted that extremely dense cities like Hong Kong were not good examples.

The question remains, of course, of how you can have a metropolitan region as big as, for instance, that of Mexico’s capital – home to 21 million people – and make it feel and function like Copenhagen’s, home to 2 million. For now, in Latin America as in many other parts of the world, the jury’s out.