Maliki in Iran to Garner Support for Premiership Bid 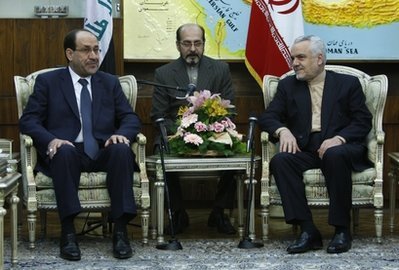 Iraqi Prime Minister Nuri al-Maliki was in Tehran on Monday to garner support for his premiership bid, as his chief rival Iyad Allawi accused Iran of meddling in Baghdad's political affairs.

Maliki on arriving in Tehran Monday morning went straight into a series of meetings, including with Iran's first vice president Mohammad Reza Rahimi and with supreme leader Ayatollah Ali Khamenei, according to local media.

State news agency IRNA also reported that the Iraqi leader was later in the day headed to the holy city of Qom.

Maliki had been in Jordan on Sunday as part of his tour of Middle East capitals aimed at drumming up support as he fights to keep his job after an inconclusive March 7 general election.

His Shiite-led State of Law bloc finished a narrow second behind Allawi's mainly Sunni-backed Iraqiya alliance but neither came close to securing a parliamentary majority in the vote.

Allawi, who has looked to support from Gulf Arab states led by Saudi Arabia which he visited earlier this month, at the weekend renewed accusations that Iran is meddling in the drawn-out coalition talks in Baghdad.

"And this is where unfortunately Iraq and the rest of the greater Mideast is falling victim to these terrorists who are definitely Iran-financed and supported by various governments in the region."

Allawi's Iraqiya bloc controls 91 of the 325 seats in the Iraqi parliament, two more than Maliki's State of Law alliance.

"These comments are not true. He makes such remarks on the threshold of trips (of Maliki) to other nations, and they are baseless," he was quoted as saying by Iran's Fars news agency.

"These comments are old and these friends have made them so many times that nobody listens."

He backed Maliki's visit to Tehran, saying it was aimed at "consulting and exchanging views with influential regional and neighbouring nations."

"Choosing Mr. Maliki as the candidate... is respected by the Islamic Republic of Iran," Sheybani told IRNA.

"With the occupying forces exiting Iraq and given the current sensitive circumstances, he seems to be one of the appropriate choices for Iraq."

Maliki visited Iran ally Syria last Wednesday and plans to tour several Gulf Arab states, where support for his rival has been strong, a close aide told AFP on Saturday.

Allawi has himself been trying to secure regional support with visits not only to Saudi Arabia but also to Damascus and Beirut in the past few months.

London's Guardian newspaper meanwhile reported that Iran has brokered a critical deal with regional neighbors to install a pro-Tehran government in Iraq.

It said Iran was instrumental in forming the alliance between Maliki and Iraq's powerful radical Shiite cleric Moqtada al-Sadr who reportedly is studying in Iran, a move seen boosting Maliki's bid for premiership.

"The deal which involved Syria, Lebanon's Hezbollah and the highest authorities in Shiite Islam positions Maliki as a frontrunner to return as leader despite a seven-month stalemate between Iraq's feuding political blocs," the newspaper said, quoting senior Iraqi officials which it did not name.

The Guardian said the Iranians saw their opportunity after the US military withdrew its combat troops from Iraq in end August.

"The Iranians were holding out until then," said a source about the timing of the Iranian move, the newspaper reported. "They were not going to give the Americans the satisfaction of leaving on a good note."(AFP)