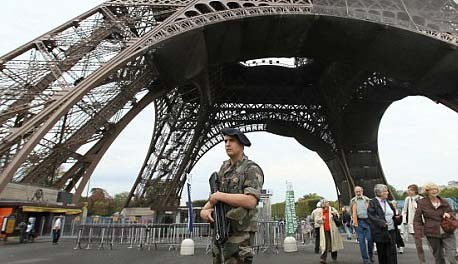 Several days ago European intelligence agencies received "a new message from the Saudi services which indicated that al-Qaida's branch on the Arabian Peninsula was possibly active or planned to be active" and was targeting "the European continent and in particular France", Hortefeux said in a radio and television interview.

"The threat is real and we remain alert," said the minister, adding that France's security threat level remains at one level below the highest level of scarlet.

The Saudi warning follows several warnings in the past weeks.

Hortefeux said on September 9 there was a warning from Interpol and then a week later a second warning of a possible attack by a female suicide bomber.

Western security officials have also warned that al-Qaida may be planning attacks in Europe similar to those that struck Mumbai in 2008.

In that assault, 10 militants from the al-Qaida-linked group Lashkar-e-Taiba mowed down unarmed civilians at targets across the Indian city after arriving by boat from Karachi, leaving 166 dead.

In particular Western intelligence agencies are worried a group of Islamist extremists is planning to return to Europe after combat training in the Afghan-Pakistani border regions.

Hortefeux said Paris was "...monitoring a certain number of people who study at extremist Koranic institutes, monitoring people likely to return" to France.

The minister said France on average uncovers two terror plots per year, and that currently 61 people were jailed for terrorism.(AFP)