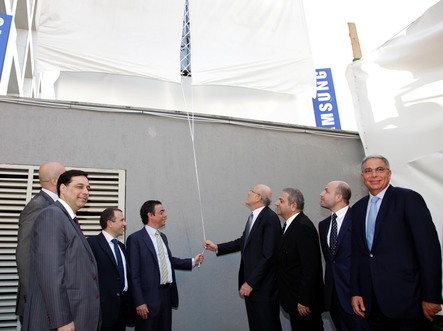 The Beirut Digital District (BDD) was launched Monday in the neighborhood of Bashoura, in the heart of Beirut, with the aim of creating a hub for technology, attracting foreign investment and helping retain young and talented Lebanese.

"Beirut Digital District: Connects decision makers with entrepreneurs. This is a project that aims to create a hub for the digital industry in Lebanon and in the region,” added Sehnaoui.

The center, which is a high-rise building in Bashoura with 3,200 square meters of office space, is promising to offer advanced infrastructure – including broadband Internet and state-of-the-art information technology facilities according to local reports.

The center also aims at becoming a center for IT startups.

“Lebanon has always supported digital and technological economy”, said Prime Minister Najib Miqati during the inauguration ceremony that was held under his patronage.

“This initiative is the result of a true collaboration between the private and public sectors. We hope that there are many others. Lebanon will do everything to preserve its economic and media freedom,” he said, while promising to work for peace and the unity of the country.

How about getting electricity for more then 2 hours per day first?

Is this some kind of joke? With no electricity and internet slower than in some parts of Africa??!! And when you offer the highest speed internet for $1,000 a month? The government should be ashamed of themselves. How pathetic. I would first make internet AVAILABLE and AFFORDABLE before attempting such nonsense. I would address the corruption in the country before creating a "Digital District." I cannot even load a video when I am in Lebanon it is so slow and I pay $150 per month for it.

24 hour electricity and sewage control should probably come before a digital district. How about reinvesting this foreign investment into the country instead of government officials pocketing it all.

well it's somehow better than doing nothing! all large digital entities and headquarters are going to our friends next to us!

Awesome! This is much needed for all the developers & designers of Lebanon should come together and develop apps, and online services for Lebanon and the Mena region.

Creativity is ours ly obstacles. Negative people - Stay Away!

How do you want to create apps with no electricity in the country. Leaders need to focus on basic human rights first