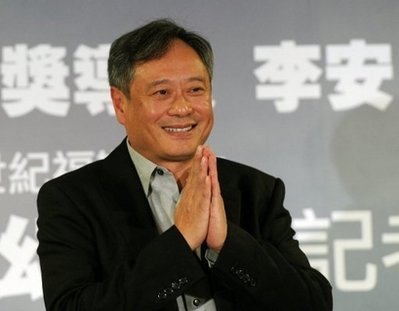 The movie, set to be released in December 2012, is based on the Booker prize-winning novel by Yann Martel about an Indian boy adrift on a lifeboat in the Pacific with a zebra, a hyena, an orangutan and a tiger.

"This movie involves water, kids and animals, all the things you better not touch in a film," Lee joked at a press conference in Taipei, confirming that about two-thirds of the Fox 2000-produced film will be shot in Taiwan.

"It's very challenging to shoot a 3D film because it is very new and nobody really understands it... Everybody is exploring it and it is filled with the unknown," he said.

"3D is a new film language. It has new appeals and represents new breakthroughs," Lee said. "I am very excited to shoot the film and I hope the audience will enjoying watching a good movie."

The film features a newcomer, 17-year-old Suraj Sharma, in the lead role of Pi Patel. Sharma was chosen out of 3,000 candidates during casting sessions across India.

"He is the only kid with the appealing qualities that I'd had in mind. He is moving and very natural and makes the story seem real, so I thought it should be him," Lee said.

The filmmaker, who is based in New York, was hailed as the "glory of Taiwan" after becoming the first Asian to win a best director Oscar for his gay cowboy drama "Brokeback Mountain" in 2007.(AFP)