This Year's Winner Instabug Powers on With Public Beta 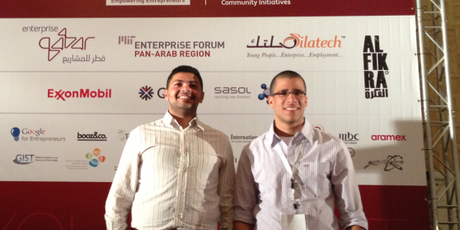 We’ve all experienced that irritating bug that we weren’t able to easily shake off. Yet with its bug-reporting platform, Instabug creates an immediate bridge between the app user and app developer triggered by a literal shake of the smartphone.

Since the launch of their public beta version of Instabug last week, this year’s winners of the MIT Enterprise Forum (MITEF) Arab Startup Competition in partnership with ALJ Community Initiatives, Omar Gabr and Moataz Soliman, from Egypt, have managed to maintain a steady increasing rate of developers who use the bug-reporting tool.

“We’ve kept momentum in our interaction with developers since last week’s public beta launching,” says Gabr. Instabug has managed to uphold a buzz and has been featured in over 10 publications since their beta went public, including VentureBeat,TechCocktail and Fast Company.

Gabr adds that the public beta launched on July 10, was specifically successful because the team received equivalent traction on the website in one day to what they had received over the past year.

“We are keeping the numbers confidential until we reach a certain milestone,” says Gabr regarding statistics of Instabug’s public beta.

Up until the public beta launch, the Instabug team had handpicked over 200 developers to have access to the private beta bug-reporting platform in April. Amongst these app developers was Rand Hindi, founder of Snips, a predictive OS app for cities that uses data and technology to benefit city dwellers.

“I was truly impressed by the quality of the product and how easy it was to integrate within our existing app. It held the load perfectly,” says Hindi, “We are getting a lot of user feedback, which we use to determine what we can improve and what new features we could add. And it gives users an official place to complain instead of writing bad reviews on the app store when there is a bug!”

“Our users love shaking their phone when they want to say something!” says Hindi.

It takes one line of code and only a minute for the developer to integrate Instabug into their app.

“We strongly believe that when the feedback comes to you instead of the App Store, you control your destiny!” tweets Instabug.

The start-up is among the eight to be accepted into the first Google for Entrepreneurs program in Silicon Valley. They will participate in the Blackbox Connect program in the coming week where they will further practice pitching to investors. Google for Entrepreneurs recently partnered with MITEF Arab Startup Competition, along with TechWadi, as announced on July 2 at the Coworking961 office in Beirut.

Instabug reports that they are excited to have the opportunity to return to Silicon Valley for yet another entrepreneurial program, held by TechWadi. They received this prospect on account of winning the MITEF Arab Startup Competition earlier this year.

“I was very impressed by the two young entrepreneurs themselves, they knew what they wanted to do and were highly focused. They showed all the signs of passionate entrepreneurs but also quite professional given their age group,” says Neveen El Tahri, CEO of Delta Shield for Investment, and jury member at the MITEF Arab Startup Competition, held in Doha early this year.

Their passion aside, the founders led the competition with originality.

“What impressed me the most about Instabug is its innovation in simplicity and utility,” says Fadi Ghandour, founder of Aramex, and final jury member at the MITEF Arab Startup Competition 2013.

Another final jury member at the competition, Nabil Taleb, founder of Nexius, finds that besides its "good value proposition to app developers", Instabug has, "potential to be global and not limit itself to the MENA region."

The competition not only gave Instabug $50K for winning the start-up competition, but more importantly, for Gabr, they received a networking opportunity.

At the MITEF Arab Startup Competition, Instabug met a member of the Google team who helped connect them with the Android team, to solve an issue they were facing with Android. “We had some really good benefits at the event aside from the competition,” says Gabr.

Following the competition, Instabug continued to network, which served to raise funds.

“After the MITEF Arab Startup Competition we received many interested investors due to the traction we got there. So this helped us close our seed round to a sum of $150K with The Cairo Angels and Leap Ventures,” says Gabr. To note, Chair of MIT Enterprise Forum Pan Arab Hala Fadel, is also Managing Partner at Leap Ventures.

This story is provided by MIT Enterprise Forum - Pan-Arab Region.