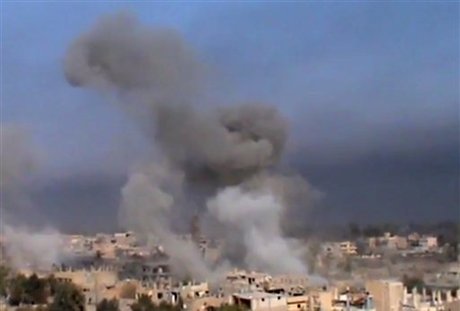 The recapture, reported by a monitoring group and state television, was part of a broader army campaign that has seen a string of towns in the area fall into regime hands.

And in The Hague, the Organization for the Prohibition of Chemical Weapons (OPCW) said inspectors had verified all but one of Syria's 23 declared chemical weapons sites.

The regime's recapture of Sbeineh, a key rebel stronghold south of Damascus, comes nine days into campaign aimed at cutting off one of the main rebel supply lines into southern Damascus, according to the Syrian Observatory for Human Rights.

Closer to the capital, government troops have besieged a number of rebel-held suburbs for months, and U.N. officials have expressed concern over reports of trapped civilians and severe malnutrition.

"Sbeineh was one of the most important rebel positions on Damascus's outskirts," the Britain-based group's director Rami Abdel Rahman told AFP.

"Rebels in southern Damascus have now had practically all their supply routes cut off," he said.

"Our brave army has taken control of... the Sbeineh (area)... and (the nearby village) of Ghazalah in Damascus province after crushing the last terrorist positions there," said the broadcaster, using the regime's term for the rebels.

The takeover of Sbeineh, a rear base for rebels in southern Damascus, comes a year into a suffocating army siege of the town.

"The army was backed by fighters from Hezbollah, the pro-regime paramilitary National Defense Force as well as Syrian and non-Syrian Shiite fighters from the Abul Fadl al-Abbas brigade," Abdel Rahman said.

"There are fears for the lives of civilians in Sbeineh. Experience tells us that the army may well execute civilians and put the blame on rebels," he said.

Abdel Rahman said the army has been able to advance in part because of "divisions among the rebels."

He said both sides suffered heavy losses in the fighting, and that "the fight south of Damascus is more sectarian than elsewhere."

The burial site of Sayyida Zeinab, granddaughter of the Muslim Prophet Mohammed, is an important Shiite shrine located in southeastern Damascus, near several areas held by the mainly Sunni rebels.

Seasoned Hizbullah fighters from Lebanon and troops from Iraq, who have long been helping to defend the shrine, are now actively fighting on behalf of the regime of President Bashar Assad, who hails from Syria's Alawite community, an offshoot of Shiite Islam.

In France, Fabius said there was "fairly recent" proof that four journalists kidnapped in two separate incidents in Syria are alive.

On June 6, unknown men detained Didier Francois, a seasoned war reporter for Europe 1 radio, and Edouard Elias, a photographer, at a checkpoint as the pair travelled to the country's second city of Aleppo.

On June 22, reporter Nicolas Henin, 37, and photographer Pierre Torres, 29, were seized while working in the northern city of Raqa.

The OPCW said its inspectors had verified all but one of the country's declared chemical sites.

The group said Syrian personnel had visited one of two remaining sites that they could not visit for security reasons and filmed it with "sealed cameras."

OPCW and U.N. inspectors have until mid-2014 to destroy Syria's entire chemical arsenal and production facilities under the terms of a U.S.-Russian deal to head off military strikes on Assad's regime.

"The verification was conducted with the support of sealed cameras used by Syrian personnel as per the inspection team's guidance," the Hague-based OPCW said in a statement.

"The exact geographical location and the time of capture of the footage/images were fully authenticated," it said, adding that the site was near the northwestern city of Aleppo.

"As per the declaration by Syria, the site was confirmed as dismantled and long abandoned, with the building showing extensive battle damage," the OPCW said.

It has already destroyed 99 warheads and is expected to destroy 55 more, with Damascus facing a November 15 deadline to finalize the plan for the destruction of the chemical arsenal.

I was overtaken with emotions..... tears rolled down my tender young cheeks when Alona interrupted my daily Ashura rituals to alert me to this glorious news. How befitting during these Holy days of Ashura Our Islamic Secular Resistance along with our Shia brethern from the Abul Fadl al-Abbas brigade finally stormed this terrorist hub and liberated it from KSA backed takfiris. The President of the Republic just minutes ago talked about the necessity to adhere to the dissociation policy. The resistance just answered with a shocking yet expected divine victory in Syria. Bless Sayyed Hassan when he recently said "THIS IS OUR TIME". By God yes, this is Our Time.... We the Shia of Ali Ibn Taleb will not rest until all of Shabaa Farms and Jerusalem are liberated from KSA backed terrorists. Karbalaaaaaaaaa Ya Mazloooooom

Not everybody is as saintly and as observant as your brothers in al-Qaeda, may we see pious people as they here in our prairies! Oops, they already are here? Wow. They are so nice, quiet and gentle that nobody felt their presence, yet! takbir

god bless Rami Abdulrahman, the voice of reason objectivity and truth, who can see from his window in Covent Garden the Hezbollah fighters fighting alongside the regime in Sbeineh.
Had it not been for him, nobody would have ever known because there are no videos or pictures to prove it nor confirmation from credible objective sources.

god bless Rami Abdulrahman, the voice of reason objectivity and truth, who can see from his window in Covent Garden the Hezbollah fighters fighting alongside the regime in Sbeineh.
Had it not been for him, nobody would have ever known because there are no videos or pictures to prove it nor confirmation from credible objective sources.

In the mean time, go SAA, crush them fanatics and international criminals. They have chosen Syria to be their last destination, that's the only wish they can be granted.

then i guess hezbi are in syria for tourism right? as your master never said they returned back to lebanon to obey the state of lebanon and the baabda declaration....

that was a statement that aoun made out of pure assumption, when he was working to get syria out of lebanon while your leaders were shining syrian shoes and filling their pockets together with them.
he said what he believed, he's entitled to an opinion, that doesnt make it a proof.

also note that since then he returned to lebanon and it seems he found out more about it, since he changed his mind.

i have nothing to "admit" since i am not concerned. i said it was his opinion at the time, and his opinion evolved since he got closer to the question.

maybe you should ponder on that if you're so interested in General Aoun's statements (unless you just want to pick & chose what suits you. not saying you are, this would be below you, of course)

and I bet you are the the world's current best paid propagandist. Laughable indeed..... I bet Justin Bieber and Rihanna backed up by Artillery and Air cover would have taken this suburb faster than your mighty terrorists.

Hezbollah's training of the NDF and SAA who are not trained in asymmetrical-guerrilla warfare unlike Hezbollah seems to be paying off.

Sayyed Hassan Nasrallah terrifies the Scarabs of Scarabia. His honesty and integrity is poison to them. They can't bribe him or break him with the murder of his son. The man is a saint protecting the burial site of the granddaughter of the prophet(pbuh) from Saudi terrorists.

because that shrine is only for shias right? LOL

Isn't ironic these "mercenaries" were able to launch rockets with sarin gas payloads, yet to this moment they have not been able to shell or hit the tomb although they are a few hundred meters away from it ( as Nasralah claimed in his speech)...!

"A mercenary is a person who takes part in an armed conflict, who is not a national or a party to the conflict and is "motivated to take part in the hostilities essentially by the desire for private gain"

The official definition of the word mercenary applies in its entirety to the terrorist party of hezballah.

and of course, "casper" here knows better than the Hezbollah fighters why they are in it.

I'm laughing at your post FT... if ridicule would kill, you would not be among us anymore... can't wait for your reply now :)

glorious eh! Sure... glorious, ashraf, divine, saints... yeah... that's exactly the vocabulary they use to make sheep like yourself believe they are necessary, strong or invincible...well...none of the above! They are the cancer of Lebanon my dear friend.

Oh wow hamadi... so... Nasrallah (the terrorist, the assassin, the drug-lord, the mercenary) is a saint...hmmm... you're buying too much of his Colombian stuff dude...

Hahaha. Worlds current best. At least you have a sense of humor to compensate.

@ Flamethrower, when u want to talk about Hezbollah as beeing a well trained militias, it is, but actually in Qusayr , they needed a month with the help of the syrian army, helicopters, planes, mortars, tanks to crush some fanatics with RPG's maybe couple of mortars... what a worlds best.. not to mention in 2008 when they want up to the jabal the druze cut them in pieces. Im actually not with anyone, and i hate all of them more each day, seeing no one gives a shit about Lebanon. One side is chiite extremists, the other sunnite extremists, and christians are as usual tearing themselves among each other.

My best advice to u all is to forget about politics, let the so called " leaders" battle it themselves. The more u spread hate, the more they have soldiers to die for them, is that what u want? let them shoot each others but i thank god im mature enough to not give any drop of blood for them and their warmonger wars.