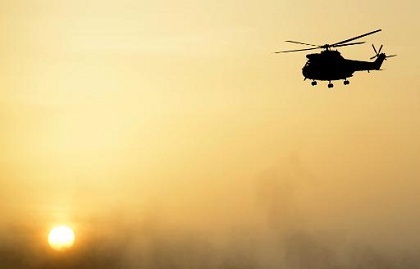 Ministers from countries across the Sahel and Maghreb agreed Thursday to create a border security training center in a bid to confront Islamist-linked violence plaguing the huge desert region.

Delegates hailed the proposal in the "Rabat Declaration" adopted by 19 countries at a conference in Morocco's capital as an important step towards curbing jihadist unrest in the Sahara, notably in Mali and Libya.

The training center, which Morocco's Foreign Minster Salaheddine Mezouar said could be in Rabat, would be complemented by closer intelligence cooperation and new technology at borders.

"We welcome the idea of setting up a training center on border security," Libya's Foreign Minister Mohamed Abdelaziz told reporters.

"Libya has more than 4,200 kilometers (2,600 miles) of land borders and more than 2,000 kilometers of maritime border. How can we achieve border security without regional and international help?"

Tripoli, which hosted the last regional conference on border security in March 2012, has struggled to impose order since NATO-backed rebels overthrew and killed dictator Moammar Gadhafi in 2011.

"We hope to sign a contract to train another 2,000 policemen for counter-terrorism, and an accord with the head of (Libya's) national security directorate."

Mezouar warned that the vast Sahel expanse of rock and sand stretching from Senegal to Somalia had become "an open space for different terrorist groups, and drugs and arms trafficking networks threaten the security of the whole region".

He said regional states have the political will "but need the means... to confront the different security challenges they face".

At the last meeting on Sahel border security 18 months ago, in Tripoli, an action plan was adopted aimed at boosting coordinated efforts against terrorism, illegal immigration and organised crime.

But violence blamed on Islamist militants since then, including in Tunisia and Algeria, has clearly demonstrated the need for ever greater efforts.

Fabius said he had received evidence that members of Nigerian Islamist group Boko Haram, which Washington added to its terror list this week, had received training in Mali's Infoghas Mountains.

Mali continues to suffer deadly Islamist insurgent attacks 10 months after France launched a military operation against al-Qaida-linked groups occupying the north, where two French radio journalists were executed at the beginning of November.

Thursday's conference tasked Libya with setting up a secretariat to oversee implementation of the Tripoli action plan and the Rabat Declaration, and to report back within two months.

"The Libyans have been given the mandate to start, in consultation with the neighboring countries, to establish this mechanism," Libya's Abdelaziz told Agence France Presse.

But reflecting the difficulty of closer regional cooperation, Algeria's Foreign Minister Ramtane Lamamra was not in Rabat following a major diplomatic spat over the Western Sahara, a conflict that has long divided the Maghreb arch-rivals.

Algeria was instead represented by a foreign ministry official who refused to discuss the dispute.

Despite vying for influence among African allies, Algeria remains a regional security heavyweight, and shares long, porous borders with Libya and Mali.

Security threats in the Sahara were most starkly illustrated in January when Islamist gunmen overran a gas plant in the Algerian desert, in a bloody four-day siege in which at least 37 hostages were killed.

Libya's foreign minister underlined Algeria's "very essential role" in the region, and regretted "any issue... that will have implications for regional cooperation on border security".

Both Britain and France both stressed the need for social and economic development alongside coordinated political efforts to secure the region's borders, partly to stem the flow of illegal migrants.

"It's not just a question of the political will at the general level," said Stephen O'Brien, Britain's special representative for the Sahel.

"Above all (we must) also recognize that there is a need to understand the essential basic services that are required by many of the communities."

Regional conflicts have merely fueled the flow of sub-Saharan Africans seeking a better life in Europe.