Army Carries Out Raids in Tripoli after Taking Charge of Security 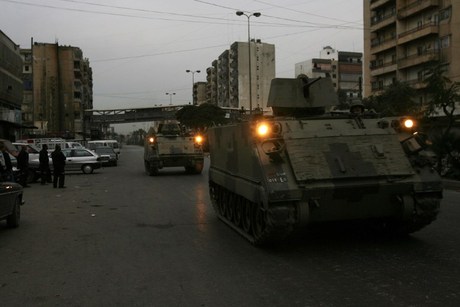 The Lebanese army on Tuesday carried out raids in Tripoli, a day after the country's top leaders authorized the military to take charge of security in Lebanon's second-largest city for six months.

According to the decision, the army would also be in charge of carrying out arrests ordered by the judiciary.

The first aspects of the agreement among the top officials was implemented on Tuesday morning. Heavy gunfire was heard in the city's internal markets between Bab al-Ramel and al-Mulla mosque after the army raided militant hideouts.

Later, the army command said in a communique that a military patrol arrested Ahmed Abdul Qader al-Shami who had pointed a gun at the driver of a military vehicle used for the evacuation of victims.

During the raid, the patrol came under fire by several gunmen, it said.

Security measures such as patrols and checkpoints have already been increased in the port city with the assistance of the Internal Security Forces that have been put under the command of the army.

But intermittent sniper fire continued to shake Tripoli on Tuesday.

The fighting in the city is linked to the war raging in neighboring Syria. Bab al-Tabbaneh district, which is majority Sunni, and Jabal Mohsen, whose residents are from Syrian President Bashar Assad's sect, have been engaged in severe gunbattles since the revolt against him in March 2011.

Tensions soared in the city in August when twin car bombings hit Sunni mosques that left hundreds of casualties.

Authorities arrested several members of the Arab Democratic Party, whose stronghold is in Jabal Mohsen, on suspicion they were involved and they summoned the group's leader, Ali Eid, for questioning.

Eid has refused to be questioned by police for not being “impartial.”

His son, Rifaat, said his father is ready to go to any security agency other than the ISF Intelligence Branch.

The latest round of violence erupted last week when Jabal Mohsen residents were shot in their feet in vengeful sectarian attacks.

no it means that the ISF is completely partial and belongs to a certain side.

just like rifi denied it during years and years, and just as he was no longer heading it he started puking out sectarian talk and referring to M14 as "his political side".
such sectarian hypocrites are what destroys the credibility of our institutions.

I agree a hundred percent

I too lived through the civil war and i can still hear it in my head something that should be avoided and end this 2 sided battle for power and foreign interference in our beautiful country...the army needs to dissarm every faction including HA and they need to be the protecters of lebanon

True HA does not want a civil war and is practicing restraint.

But who would want a civil war in a country it is controlling? HA does not need a civil war since it positioned itself as lebanese legality itself.

leb_first: that is exactly the point i made to explain why i believe m14 is behind the security degradation since hariri was ousted (constitutionally) and responded with unleashing the "day of rage"

March 14 happened as a response to the thug demo of 8 march to show the world that we as lebanese desire a modern fair sovereign state, not to be a medieval satellite to assad.

that's the inflamatory rethoric that m14 promotes. they have a lot of influence on the sunni street, instead of de-escalating they inflame so no i disagree. it is too easy to blame it on HA or assad, at least they should take responsibility when they fuel strife.

and m14 as a saudi slave has nothing modern, fair, or sovereign. please spare me the bull

Im not pointing fingers roar im i didnt say who is digrading or anything hateful at all i was just stating the fact that lebanon should have one army no political group or faction should be a mafia but im glad i think for the first time we all are on the same page for once if we can do it here why cant these politicians do it at the table ??

It happens that Lebanon is important to a regional power:iran, and Iran is willing to invest here.

You say that the shia are the least needy now because of HA. But compare the sunni assistance of Hariri who sent hundred thousand sunnis to college and gave them an education to HA who merely gives his constituents primary education and health services to keep them dependant on him...

Mowaten. you cannot keep half the population armed, imposing their agenda on the second half. whichever way you turn it around. On 7 May, HA became a milicia who used its muscles to enforce its agenda. You can insult KSA for hours, facts above will not change. HA needs to disarm.

agreed phoenix, i'm all for a full disarmament of both sides in tripoli, accompanied by a strong military presence to prevent any side of taking advantage if the other disarms.
the one thing i'm worried about are those like rifi who point the finger in one direction and pretend like there is nothing wrong on the other.

Inno if we go back to 2006, Lebanon was about to recover totally from the civil war and boooooommmmm!!!!! They took out a former prime minister in Beirut and 21 other lebanese, all indicators show that HA was responsible under the directions of Syrian intelligence, that was the start, that made the clock run back wards, there were no other weapons then except with HA, look at what they have done, look how they harmed their mother(Lebanon), look at how we have started with inta Sunni inta shia inta massihie, are we really living in the 21st century or a few hundred years ago?

I hold HA responsible for all that is happening now, they killed Rafiq Harriri the only politician who did any good (yes yes blah blah blah I know your baseless arguments) He at least rebuilt the downtown rebuilt a lot of Lebanon and do you know why u morons?? to bring back the tourists because thats the only thing that will make Lebanon rise from the ashes, not to mention the 2008 war that came just before one of the biggest tourist seasons Lebanon was ever going to see. You call yourselves Lebanese? You are a bunch of uneducated thugs who sold themselves for a few dollars, you are so up yourselves you think youre the only ones that know how to carry a weapon and aim, i've got news for you brother so can anyone over the age of twelve. Keep pushing and you will find out.