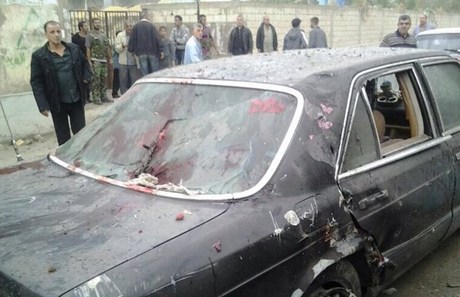 An explosion went off in the Palestinian refugee camp of Ain el-Hilweh on Tuesday during the funeral of a Fatah member.

Saleh Deeb -- a bodyguard of Palestinian Armed Struggle chief Mahmoud Abdul Hamid Issa who is also known as al-Lino -- was wounded in the blast that took place during the funeral of Mohammed al-Saadi, reported the National News Agency.

In an interview with LBCI television after the blast, al-Lino said: “We will confront those who are implementing the well-known agendas that are linked to the Israeli enemy and we will act with wisdom and will shoulder our responsibilities.”

On the possibility that the bomb attack was targeted against al-Lino, MTV said “he was at the location together with all the representatives of the Palestinian factions and everyone has agreed that those who planted the bomb have foreign objectives, specifically Israeli.”

“There is no evidence that al-Lino was the target, but his security precautions have led to these conclusions by some media outlets,” MTV added.

LBCI said that the youth who planted the bomb was killed in the blast, while MTV reported that explosive was comprised of a 120mm mortar shell that was remotely detonated.

Moreover, he said that the sides who killed Saadi were likely behind Tuesday's blast.

“The Ain el-Hilweh blast is part of a series of attacks against us. Some sides want to break our unity and create tensions,” he remarked.

“The necessary measures will be taken against whoever is found to be behind Tuesday's attack,” Maqdah warned.

NNA later said that the assailant who was killed while planting the bomb has been identified as an Egyptian national known as al-Bayyoumi.

Saadi was killed on Sunday by a member of the Jund al-Sham group.

Two other people were wounded in the shooting.

An armed clash had taken place on Thursday night between members of Fatah and Jund al-Sham.

Al-Lino, please take your thugs out of my country.

lol nice one! blame the victim of the attack and make sure not to mention the perpetrators of the attack.
oh wait, it's probably jund el sham, we can't say anything about them they are too cherished by m14 as part of the takfiri scout club.

get a life ice-boy, you're pathetic.