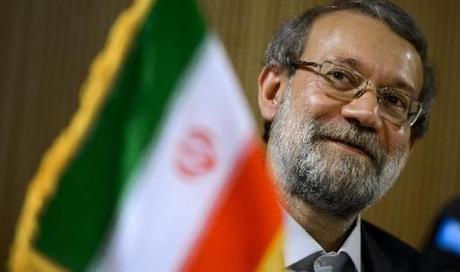 Tehran enjoys good relations with Muscat, but is locked in a decades-long rivalry with Saudi Arabia, while some other Gulf countries are wary of the ambitions of their neighbor across the water.

"The good relations between the two friendly countries were discussed during the meeting, as well as the various levels of existing bilateral cooperation," ONA said.

"Iran has all respect for the vision of the sultan, which takes Omani-Iranian relations to top levels," ONA quoted Larijani as saying during a meeting with his counterpart, the head of the Majles Al-Shura consultative council, Khalid al-Mawali.

The visit comes hot on the heels of a Gulf tour by Iranian Foreign Minister Mohammad Javad Zarif, who praised Oman during his stop in Muscat on Sunday for its role in last month's negotiations between Iran and world powers that paved the way for a landmark nuclear deal.

Zarif's tour, which also took in Kuwait, Qatar and the United Arab Emirates, was aimed at assuring Gulf countries that the deal over its disputed nuclear program is in their interest.

Sultan Qaboos has acted as an intermediary between Western countries and the Islamic republic in the past few years.

According to reports, the sultanate hosted secret talks between Iran and the United States in the lead-up to the accord on Iran's nuclear program.