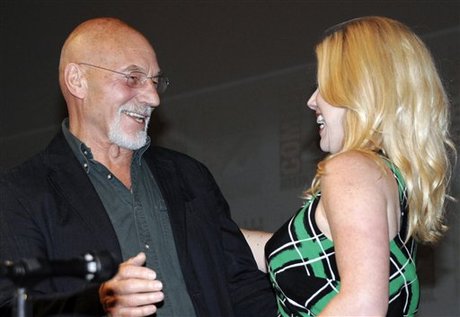 About 6,000 people in the main hall at the fan convention Saturday sang "Happy Birthday" to Stewart during a preview panel for the animated musical "Dorothy of Oz."

Stewart provides the voice of a wizened 900-year-old tree in the movie, though in real life, he turned 71 on July 13.

Voice co-star Megan Hilty, a Broadway singer whose credits include the Oz musical "Wicked," led the crowd in the song for Stewart, an idol among Comic-Con fans for his roles in "Star Trek" and "X-Men."

Due in theaters next summer, "Dorothy of Oz" features "Glee" star Lea Michele providing the voice of the Kansas girl who journeys to a colorful fantasy world.

Other voice stars include Dan Aykroyd as the Scarecrow, Kelsey Grammer as the Tin Man, James Belushi as the Lion and Martin Short as the villainous Jester.