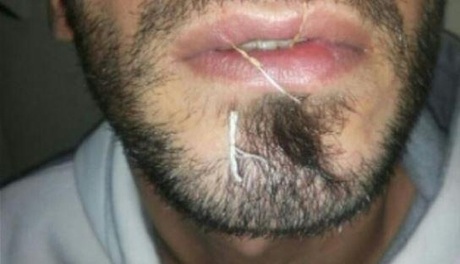 Dozens of inmates in the Roumieh prison went on a hunger strike on Wednesday to protest the jail administration’s “mistreatment.”

"Around 50 prisoners went on a hunger strike to protest what they described as Roumieh administration’s ill-treatment of the detainees,” LBCI television reported.

The jailed men also demanded a meeting with State Commissioner to the Military Court Judge Saqr Saqr to file a complaint against the administration in Lebanon's largest prison.

The inmates even sewed their lips together to announce the beginning of their hunger strike, according to a video footage that was shown on LBCI.

Wednesday's development in Roumieh comes two days after three prisoners succeeded in escaping the detention center in Roumieh on Monday.

However, security forces were able to catch and arrest Mohammed al-Jouni and Saeed Sabra, both Lebanese, while Syrian national Muhannad Abdul Rahman remains on the run.

I draw your attention to a fact that many tend to overlook. My relative is an active and successful lawyer. Do you know that hundreds of inmates at Roumieh have been held without trial for years! Some of those have been arrested based on rumors and there is no evidence to incriminate them.

the only rumor here is the one you're spreading ex-convinct.

yes anonyme, of course we all agree on this banality that everyone is entitled to a trial. what i reject is his accusation that people "have been arrested based on rumors and there is no evidence to incriminate them".

i actually could blame many people here for condemning before a trial even started, and without evidence whatsoever.
you yourself do this very often, so dont preach what you dont do.

+1 from me anonyme, rare enough to be said.

Roumieh is a gapping wound for the lebanese justice system, it just shows how unjustly many people are detained without any trial. There are petty criminals that are being treated very harshly there, people who stole as little as a can of milk, yet are there to pay a price a lot heavier than criminals a lot dirtier than them. There are big Mafiosis there, terrorists, blatant killers, who are enjoying all the comforts of the Lebanese State, and that includes daily food deliveries from the best restaurants, mobile phones, internet, TV, papers, bodyguards, you name it, these dirty criminals are enjoying it from the comforts of the prison system. Until the law makes sure that the pusnishment dished are commensaurate with the crimes commited, our prison system remains the worst in the world.