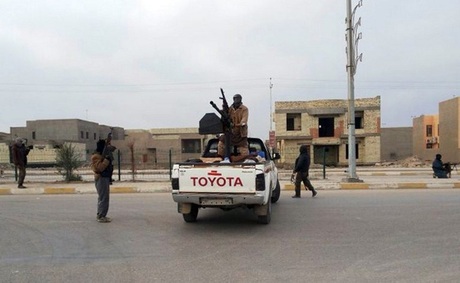 Violence across Iraq, including shelling and clashes in a militant-held city on Baghdad's doorstep, killed 30 people on Wednesday amid a protracted surge in bloodletting with polls looming next month.

The bloodletting also wounded dozens more as the authorities struggle to grapple with the country's worst unrest since 2008, when it was just emerging from a brutal Sunni-Shiite sectarian war that killed tens of thousands and displaced countless others.

The violence, in which more than 2,000 people have died already this year, has been primarily driven by discontent in the minority Sunni Arab community, that alleges mistreatment at the hands of the Shiite-led government and security forces, and by the civil war raging in neighboring Syria.

In Wednesday's deadliest incidents, shelling by government forces in Fallujah and clashes in and around the city killed 15 people and wounded 40, according to Ahmed Shami, the chief medic at the city's main hospital.

The violence erupted just after midnight and continued through to the morning in northern, eastern and southern neighborhoods of the city. It was unclear how many casualties resulted from the shelling, and how many from the clashes.

Security forces have periodically shelled neighborhoods of Fallujah in recent months, arguing that they are targeting anti-government fighters holding the city.

Tribal leaders in the city confirmed the doctor's account.

Mahmud al-Zobaie, a leader of the Zoba tribe, added: "There are many people killed and wounded, and many homes have been damaged because of the shelling."

Fallujah has been outside government control since militants overran it and parts of nearby Ramadi, capital of the predominantly Sunni surrounding province of Anbar, in early January.

Security forces have managed to wrest back control of Ramadi but a stalemate has persisted in Fallujah, just a short drive from Baghdad.

North of the capital in Ishaqi, four policemen were killed and four others were wounded when they tried to investigate a parked car that had a booby-trapped corpse inside.

A bombing and shootings in and around Baghdad, meanwhile, killed seven people, and attacks in the restive northern provinces of Nineveh and Kirkuk killed four.

More than 300 people have been killed so far this month and upwards of 2,000 since the beginning of the year, according to AFP figures based on reports from security and medical sources.

Analysts and diplomats have urged the Shiite-led authorities to do more to reach out to the disaffected Sunni minority, but with elections due to be held on April 30, political leaders have been loath to be seen to compromise.