Refugees in Akkar: Those who Voted for Assad are Not Syrians 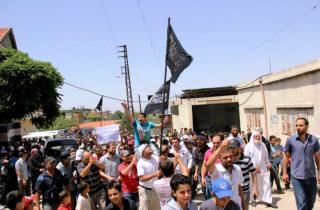 A number of Syrian refugees on Friday staged a sit-in in the Akkar town of Khirbet Daoud in rejection of the June 3 presidential elections in their war-torn country.

According to Lebanon's National News Agency, speakers at the sit-in stressed “the need to boycott these polls,” confirming that they will not head to “the ballot boxes that will be placed by the Syrian regime at legal border crossings with Lebanon on June 3.”

And as they called for “toppling Syrian President Bashar Assad and shunning the illegitimate vote,” the protesters noted that their sit-in is “in response to those who cast their votes at the Syrian embassy in Beirut” on May 28 and 29.

“Our sit-in is also against the violations that have been committed against us and in support of our mosques that were destroyed and our people who were displaced from their country, and so that we don't forget the blood of the martyrs,” the demonstrators added.

“Most of those who headed to the Syrian embassy to vote for Bashar Assad are not Syrians at all,” they said.

On Wednesday and Thursday, thousands of Syrians streamed to their embassy in Yarze near Beirut to vote in the presidential polls, in what Damascus' Lebanese and Syrian critics have described as a prearranged “show of force.”

The midweek, poorly organized vote triggered a suffocating traffic congestion in the area, stranding thousands of commuters in their cars amid an excruciating summer heat.

Syrian Ambassador to Lebanon Ali Abdul Karim Ali said Monday that the presidential vote will be the resounding answer to all those who doubt that his government will prevail in its current conflict.

Ali said he expects a huge turnout, noting that the world criticizes and opposes the Syrian election because it fears the results.

"The Syrian people will say their word in these elections, and their word is the one that counts. Not Obama's word, Cameron's or Hollande's," Ali said, referring to the American, British and French leaders who have described Syria's insistence to hold the vote amid a raging civil war as a mockery.

Assad is all but guaranteed a victory as opposition groups are boycotting the vote and balloting will only be held in government-controlled areas of the fragmented country, where rebels hold vast territory and where entire blocks have been destroyed and emptied of their original inhabitants because of the fighting.

More than 160,000 people have been killed and millions of others displaced from their homes since the uprising against Assad erupted in March 2011, then morphed into a civil war.

Lebanon is hosting more than a million refugees. Hundreds of thousands of others are scattered across Jordan, Turkey, Iraq and beyond.

do you have a brain or is it stupidity raised to the level of an art?

somebody tells parraeels that arsal is in beqaa not akkar...

"Umm Mohammad, 50, who is from Aleppo, said she had taken a bus provided by Hezbollah to vote. “I hate Bashar, but we are just weak strangers here,” she said, adding that her son had been beaten when a pro-Assad militia member saw the opposition flag in their apartment." All from New York Times.

"Refugees in Akkar: Those who Voted for Assad are Not Syrians"........Yes, and the Syrian Arab Army are ALL Iranians and Iraqis, and the minorities and millions of secular Sunnis in Syria LOVE the mostly TAKFIRI armed opposition. Got it!

I have to congratulate the M8 media (so far) for NOT reporting that Syrian Nationals in lebanon like Um Tony or Um Ali were told by their m14 employers that if they went to the Syrian embassy they would have lost their jobs.

Rafehh...the Zionist NYT and washington post reporters who do not understand a word of arabic use their M14 allies to give them information. If you read the Times and Future online...they sound exactly the same when it comes to reporting about lebanon and Syria. This has been well documented by Dr. Asad Khalil.

the takfiri spirit is alive and well in akkar I see.

(1). Who gives a damn what these Syrian people say, we would dearly love to see the backs of them, let them go back to Syria, not today but yesterday. Where on earth refugees can come and take the jobs and professions of the Lebanese? Where in the world can a refugee move around as if the host country was his? We Lebanese are damn crooked, ruthless only caring for a quick buck, we will accept to live by expired protocols that were signed under duress, protocols that are today defeating the very existence of an entire nation. The warning is now written all over the place, yesterday a friend of mine went in to buy veggies from what was once a shop owned by a Lebanese family, then was shocked when he knew that the current owners were Syrians.

(2). Because he asked for the previous owner, the Syrians got angry and said nasty things, but then the Lebanese already primed by his anger over what is happening guy was quick on the draw of his gun, shot between the Syrians legs and left. One small incident that could have gone real bad. Such things will happen on an even larger scale soon, if our screwed up authorities just sit idly by and leave things to go as they are now. Take a bus, a taxi, go to a shop, the Syrians are taking them, how long will this last when a small spark will ignite the unthinkable? Wlak we the Lebanese can barely tay2in 7elnah, we are now expected to accept these Syrians take everything?

(3). The Lebanese no matter how bad he may be, sure, kattirr 7akeh, jagal, neswenji, whatever, but the Lebanese citizen is paying taxes, has a bank account, is paying school fees, paying for the school autocar, paying for a car or two for his family by monthly installments, pays for house and shop rent, for benzin and mazout, for telephones and all the other utilities, buys bread and groceries, goes to restaurants and Luna park with his family, has medical insurance in most cases, pays for Daman, everything, now what is the screwed up Syrian paying for, even the damn bread he would rather bring from Syria and now to make matters worse, he the Syrian is taking away our people's livelihoods?!! You guys are sleeping still, we are nearing soon a real explosion, where the Lebanese will take the law into their own hands, and here there will be no party or sectarian color, but empty stomachs speaking through the barrel of a gun. Khalloukoun neymin la wa2tah.