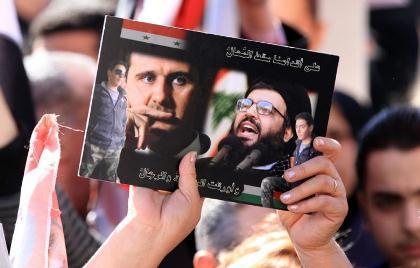 The Syrian opposition said on Saturday that Hizbullah leader Sayyed Hassan Nasrallah’s recent statements meant the Syrian regime and its allies had a strategy to bring the international efforts to resolve the Syrian crisis to a dead end.

“The Hizbullah militia does not have any decision-making but it is … the porte-parole of the Iranian regime,” the National Coalition said in a statement.

His remarks “make sense because the survival of his forces is linked to (Syrian President Bashar) Assad’s survival,” it said.

“Nasrallah’s remarks meant that there is a clear strategy by Assad and his allies to bring the international efforts to a dead end and take back the Syrian file to the starting point,” the statement added.

Assad was re-elected in a landslide, officials said Wednesday, capturing a third seven-year term in the middle of a bloody three-year-old uprising against his rule that has devastated the country.

“Syria's election is one of the most important events that have recently happened, in addition to this popular turnout which represents a major victory for its leadership,” Nasrallah said in a speech on Friday.

“The Syrians said we're the ones who make Syria's future, not the U.S. or Geneva I and Geneva II” talks, he added.

idiot hezbi whore still sounds hollow, his stupid robotic posts is the perfect image of what this militia is made of: empty brains....

Shia Takfiris
Alqaida Takfiris
...same thing.
I hope they eat each other starting with you lebpatriot2323 Takfiri.

Wow really pissed you off lebpatriot2323

74% turnout ... Considering the demographics of the war sooooooo impossible !!!
Stupid dictators and tyrants they now Zero of HOW elections work....
LOL

What was the turnout for the elections in your home country of Saudi Arabia?

My Home country is Canada and Lebanon. More than what I an say about you from Iran or is it Syria .... 74+ % turn out...
Saudi Arabia I like you hope it becomes democratic one day ... Iran too

But I say they both serve the Zionist

People or sheep like you truly believe everything that is spoon fed to you... You can't possibly sit down and ponder in your own thoughts and maybe consider you are been made a fool of.
Do you seriously believe what a politician says!?!?!? From ANY part of the earth... That's how bad things are on this planet now... I hate people who believe everything they are spoon fed...
JUST for once consider it, consider that you are been fooled and played with...
By both M8/14.

74% of "eligible voters"... which means is 11million voted from approx 14million eligible voters of the 24 million syrians. If the regime forces control 70% of the populated areas, those that left syria illegally or the 30% living under ISIS or Al NUsra and the islamic front can't vote.

There is no national opposition or coalition or FSA.This is just a turkish soap opera that begs for money. Has no support or any influence on the ground in syria. So reality is... The jihadist, al nusra and the islamic front (allied with al Qaida) or ISIS (too extreme for al Qaida).... or the Assad Regime.

You cant keep living in denial. this is the reality on the ground. the rest of the world knows it's over.

Ado I'm sorry man but you don't make sense?
There are 22.3 million of Syrians, at minimum 7 million children ... At the minimum! 7 million.

And remember from the ASSad tyrants mouth, about 400,000 expats were able to register and vote outside Syria. And most were from Lebanon ... And the others in Turkey UAE KSA Jordan Germany .... We're not allowed to vote for a tyrants reelection...
Yes let's have election but allow AALLLLLL
STUPID TYRANTS AND DICTATORS NOW NOTHING OF WHAT ELECTIONS MEAN!

What a hideous sight; two ugly men- how revolting